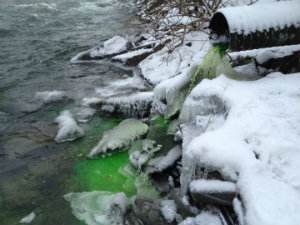 In 2000, the Vermont Legislature required DEC to implement a statewide program to promote detection and elimination of improper or illegal connections and discharges. Illicit discharges are discharges of wastewater or industrial process water into a stormwater-only drainage system. The Legislature's intent was to expand illicit discharge detection and elimination (IDDE) efforts from the communities—all in the greater Burlington area—required to perform IDDE in compliance with the EPA’s Phase 2 Stormwater Rule to encompass all developed areas of the Vermont. Following the Legislature's mandate, DEC has assisted municipalities not subject to the Phase 2 Stormwater Rule by mapping drainage systems and performing IDDE.  This work, funded through CWIP ecosystem restoration grants, USEPA Section 319, Supplemental Environmental Fines and the Lake Champlain Basin Program, has been completed for all major urbanized areas in the Missisquoi, Lamoille, Winooski (outside the greater Burlington area), Otter, Poultney, Passumpsic Rivers,  the Lake Memphremagog Basin, and the Connecticut River Basin, and the Hoosic River Basin. .  It is ongoing in the West-Williams-Saxton-Lower Connecticut River, Deerfield and Hoosic River Basins.

Stormwater Master Plans (SWMP) have been completed for about 70 geographic areas including watersheds, subwatersheds, towns and villages.  Available plans can be found below and are posted  by the Town Name in which they are located.

August 2001
Characterization of Outfalls on the Winooski River in Montpelier (1.24 MB PDF)

July 2009
Detection and Elimination of Non-Stormwater Discharges to the North Branch, Dog River and the Stevens Branch of the Winooski River in Montpelier, Berlin and Northfield (4.2 MB PDF)

Stormwater Infrastructure Data Availability:
The geographic information systems stormwater infrastructure data used in these reports is available for download thru the Vermont Center for Geographic Information Systems and as a webmap.  Please note that the VCGI database is updated once per year with data collected in the preceding year so some data illustrated in these reports may not be available through VCGI.  All data used in these reports is also available from the VTDEC Ecosystem Restoration Section. Please contact david.ainley@vermont.gov.
We also provide printable 24 X 36 inch maps of our work in the towns listed below, please click on the town of interest.