The Vermont Department of Environmental Conservation (VTDEC), in cooperation with the Lake Champlain Basin Program, initiated the Lake Champlain Zebra Mussel Monitoring Program in 1994 to track the zebra mussel's distribution through the lake. Reports are provided annually.

The efficient combination of the Zebra Mussel Monitoring Program with the Long-term Water Quality and Biological Monitoring Program provides a nationally unique lake database. Information on veliger and juvenile densities monitored consistently since the initial colonization is obtained concurrently with comprehensive water quality data. This information is critical to determining the effects of zebra mussels on the Lake Champlain ecosystem and the potential risk and impact of zebra mussel colonization of other water bodies.

Zebra mussel monitoring includes veliger (larvae), settled veliger (juvenile), and adult life stages at open-water and nearshore lake stations, lake tributaries and inland lakes. Greater emphasis is placed on veliger monitoring, as it is in their pelagic stage that zebra mussels are most easily spread and sampled in Lake Champlain. The goals of the Lake Champlain Zebra Mussel Monitoring Program include the following monitoring and technical assistance aspects:

In 2005, sampling for zebra mussel veligers was reduced to areas of the lake with low populations, including Missisquoi Bay, the Inland Sea, and Malletts Bay. Five open-water lake stations and four nearshore stations are examined each year for the occurrence and density of veligers. The open-water stations are co-located with stations of the Lake Champlain Long-term Water Quality and Biological Monitoring Project. In addition, season settled juvenile occurrence and density is monitored at the four nearshore stations, along with five near shore stations in the South Lake, Main Lake and Northwest Lake.

In 2011, sampling for zebra mussel veligers was changed to sample 13 of the original open-water stations, excluding STA09 and STA16.
Map of monitoring stations

Open-water veliger samples were collected twice monthly starting in mid-April using vertical plankton net tows. A 13 cm aperture size Wisconsin style plankton net with a 63 um (micron) net mesh size was towed vertically to the lake surface from a depth of ten meters, or one meter from the lake bottom in areas where the bottom depth was less than ten meters, at a 0.5 m/sec retrieval rate for optimal veliger entrapment.

Nearshore veliger samples were collected using horizontal plankton net tows. The net was thrown from shore and slowly towed horizontally below the surface at a rate of 0.5 m/sec. Net tow samples and field duplicates were composites of five tows of equal length. Length of tow, surface water temperature and Secchi disk transparency were recorded for each sample.

Once out of the water, the net contents were concentrated and transferred to a 50 ml plastic container and preserved with a 95% ethanol solution in a 1:1 ratio of sample to ethanol solution. After sampling, the net was rinsed vigorously three times in the lake. Sampling was discontinued in October.

To calculate veliger densities, a net efficiency of 100% was assumed and the volume of water filtered was estimated based on the length of tow and net aperture. A dissecting stereo-microscope at 30X magnification was used with a cross-polarization light technique to enhance veliger detection for counting purposes.

Veliger identification was verified under a compound microscope with assistance of VTDEC Biomonitoring and Aquatic Studies Section taxonomists. For samples containing relatively few veligers (less than100 per sample), all veligers were counted. If veligers were too abundant to count in full (greater than 100 per sample), the sample was diluted quantitatively as necessary and three 1 ml subsamples were extracted into 1 ml Sedgewick-Rafter cells, counted, and used to estimate the density of the entire sample. Densities were reported as number of veligers/m3. 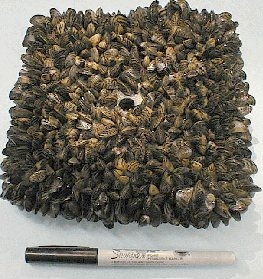 Occurrence and density of season settled juveniles is determined at the ten nearshore stations beginning in mid-April by deploying a 15X15 cm gray colored polyvinyl chloride (PVC) settling plate. The plate is arranged horizontally along a stainless steel threaded eyebolt. The plate array is suspended by attaching a rope to the eyebolt and to a dock, bridge abutment, or float. The plate array is submerged so that the plate is 2-3 m below the lake surface.

The 15X15 cm (225 cm2) settling plate is placed under a dissecting stereo-microscope at 30X magnification and all juveniles on the underside of the plate are counted. If settled juvenile densities are too abundant to count accurately, five 1 cm2 replicates are counted using a 1 cm2 counting cell randomly placed on the plate. Juveniles are counted in each 1 cm2 block, and plate density is estimated as number of juveniles/m2. On plates with extremely dense encrustations and uniform distribution of individuals, ¼ of the plate area is counted.

Zebra mussels in Lake Champlain continued to reproduce and settle successfully during 2021. The range expansion in the Northeast Lake is now complete.  Zebra mussel adults have been well established in the South, Central, and Northwest Lake since 1996. Season settling plates retrieved at nearshore stations in these areas in 2021 confirm continued reproductive success, and similar growth rates as in years past.

No Lake Champlain tributaries were selected for sampling in 2011- 2019.

No veligers were found in samples taken in 2010 from the Lamoille River, Missisquoi River, and the Winooski River. The Connecticut River in North Thetford was sampled in 2014 and no veligers were detected.

Adult zebra mussels had been found in the LaPlatte River in 1997 and in Lewis Creek and Otter Creek in 1998.  Veligers had been found in Little Otter Creek and the Winooski River in 1999.  In 2002, researchers found two adult zebra mussels in samples from dismantled Sea Lamprey nests in Lewis Creek, upstream of the Route 7 Bridge (C. Martin, USFW, personal comm., 2003).

Twenty-six lakes deemed high risk for zebra mussel infestation were sampled in 2019 with no veligers detected. A list of waterbodies selected for yearly veliger sampling is available here.

In 2019, adult zebra mussels were found and removed from the vicinity of the Lake Dunmore access area. No veligers were detected in samples collected from the lake in 2019.