Each Lake is Unique!

Each Vermont lake and pond formed under unique conditions in diverse locations; no two lakes and ponds are alike. Vermont has well-known large lakes like Lake Memphremagog, Lake Champlain, and Lake Bomoseen. Hundreds of other lakes and ponds dot the state, ranging in size from tiny half-acre ponds to larger lakes that are hundreds or even a thousand acres in size. Some lakes are known for being deep and clear, like Lake Willoughby, while other lakes are shallow and teeming with aquatic plants. The Lakes and Ponds Program works with lake communities on an individual level to assess a lake’s unique features and determine how best to protect the lake and its watershed.

When people think of lakes, they may picture wading into crystal clear water from a sandy beach. But this image doesn’t capture the reality of the diverse lake ecosystems throughout Vermont, where naturally sandy lake bottoms are rare. The diversity of lakes and ponds, including whether a lake has a sandy, rocky, or mucky bottom, can be attributed in part to how a lake formed as well as to where it is located within its surrounding landscape. 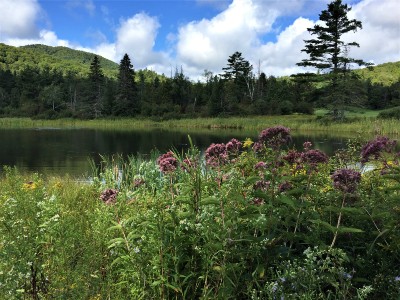 Vermont’s deepest lakes were formed by glaciers gouging the earth, creating deep depressions that filled with water as the glaciers receded north and the glacial meltwater deposited boulders, sand, and gravel. Other lakes were formed in natural depressions, dammed from the deposition of glacial material. In more recent times, humans (and beavers) have created or expanded lakes by damming smaller ponds, wetlands, or rivers. The waterbodies artificially expanded by humans are sometimes referred to as reservoirs and are generally used for drinking water, hydroelectric power, or recreation. Some lakes were formed over nutrient-rich soils, while others were formed over bedrock. These formation characteristics drive many aspects of a lake’s current natural ecological state, including the depth of the lake, whether a lake has a rocky, sandy, or mucky bottom, the types and abundance of aquatic vegetation, and the species of fish the lake supports. However, human impact on the environment surrounding the lake or pond can impact the physical, chemical, and biological characteristics of the lake.

A watershed is an area of land that drains all the streams, precipitation, and runoff to a common larger body of water, such as a river or lake. A lake’s physical characteristics are driven by the watershed's size, topography, geology, soil fertility and erodibility, and vegetation. A lake’s water quality is impacted by activities, or the land use, on the immediate shoreland and further into the watershed.  For example, the loss of native vegetation at the shoreline, the locations of roads, development pressures around the shoreline, along tributaries, and further into the watershed, and activities such as agriculture and forestry all contribute to overall lake and pond health. All of these activities impact how water moves across the landscape and ultimately enters the lake. 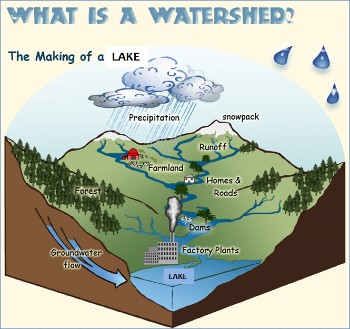 Lakes are living, dynamic systems that constantly experience slow successional change, punctuated by more rapid changes in response to activities in their watersheds. Erosion from flood events and stormwater runoff deposits sediment into lake basins. Dying and decomposing aquatic plants and algae sink to the lake bottom to combine with lake bottom sediment. The accumulation of these sediments along the lake bottom is a natural process. Like all living systems, lakes age. Even the largest and deepest lakes may slowly disappear over geologic time scales as their basins fill with sediment and decomposing plant material. Eventually, over very long time scales, most lakes progress toward becoming wetlands, marshes, or bogs. The natural process by which lakes form, evolve, and disappear takes thousands or tens of thousands of years. Human activities along the shoreland and elsewhere in the watershed can alter a lake’s natural progression or speed up the aging process.

Eutrophication describes the progress of a lake toward a eutrophic condition. Some lakes begin as oligotrophic and slowly progress or age toward eutrophic. However, this isn’t true for every lake.  The concept of lake aging has at times been interpreted by some as an inevitable and irreversible process whereby a lake eventually "dies." In fact, many oligotrophic lakes have persisted as such since the last glaciation and some ultra-oligotrophic lakes, such as Lake Tahoe (which straddles Nevada and California) may have been unproductive for millions of years”  (Lake Access 2006). Some lakes are formed in conditions that make the lakes naturally productive from the start. In reality, many physical, chemical, and biological factors impact how a lake ages and all lakes don’t start their journey in the same place. 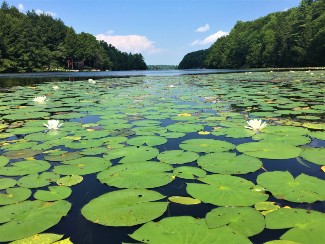 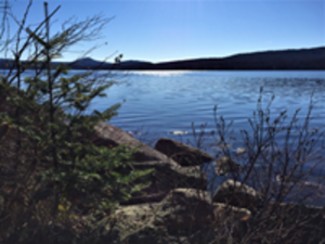 In general, shallow lakes tend to be naturally more productive than deep lakes. Shallow lakes tend to have more nutrients available to plants because these lakes do not typically stratify, or arrange into layers based on water temperature, as strongly as deeper lakes. Additionally, because shallow lakes tend to be smaller in size, nutrient loading from their watersheds has a larger impact than in larger lakes with larger watersheds. Vermont’s shallow lakes provide important and unique habitat to a variety of plants and animals. Shallow lakes function much differently than deep lakes and shallow lake users should have a different set of expectations regarding what a healthy shallow lake looks like versus a healthy deep lake. When shallow lakes have good water quality, they also tend to have abundant aquatic plants. Aquatic plants provide excellent habitat for migratory birds, fish and other aquatic life in the lake, but their presence can limit certain recreational uses.

Lakes are divided into zones of biological activity driven by the physical characteristics of the lake. 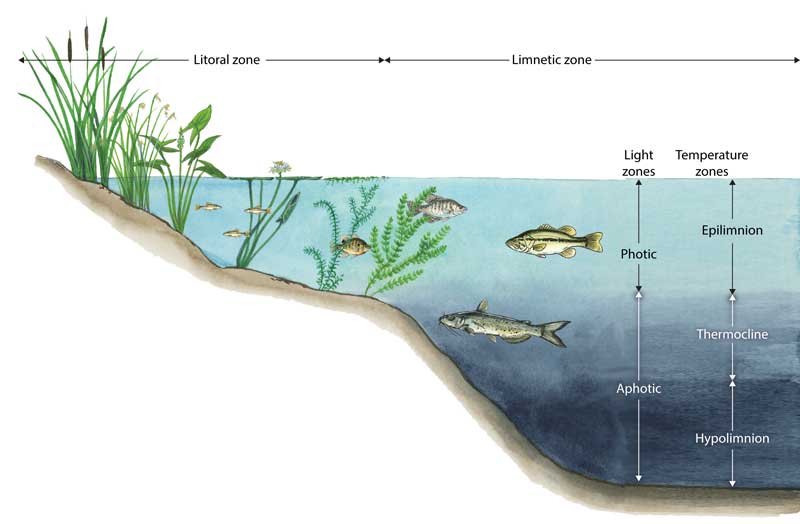 The littoral zone, which in some shallow lakes and ponds comprises the entire waterbody, is the interface between the aquatic and terrestrial environments. The littoral zone is the teeming with plant and animal life and provides important habitat and food sources for aquatic and terrestrial organisms. Vegetation in the littoral zone also provides an important erosion control function for the shoreline. The upper layer of the benthic zone is home to abundant invertebrate organisms, bacteria, fungi, phytoplankton, and zooplankton. The limnetic zone is home to many species of fish and plankton.

Water temperature and seasonal changes in water temperature have an impact on nutrient availability in a lake or pond. During the spring in Vermont, the ice begins to melt on lakes and ponds. When the ice completely dissolves on a lake, that event is called “ice-out.” After ice-out, as the sun warms the water, and thereafter deeper water becomes less dense and rises to the surface. Wind and wave action also mix the waterbody. This process fully mixes the water column and is called spring turnover. During this time after ice-out when the water column is mixed, DEC Lakes and Ponds staff collect water samples to measure, among other things, the total phosphorus concentrations in the lake or pond that are available for primary producers like phytoplankton, algae and aquatic plants. At this point in the spring, the growing season has not begun and most of the nutrients available for plant and algae growth are suspended in the water column, making spring, after ice-out, an ideal time to measure a lake’s total productivity.The Spring Phosphorus monitoring program was started in 1977 and provides a rich dataset of the status and trends of Vermont’s phosphorus levels in lakes and ponds over time.

In some lakes, especially deeper lakes, as summer progresses, the temperature and density differences between upper and lower water layers become more distinct. Deep lakes generally become physically stratified into three identifiable layers, known as the epilimnion, metalimnion, and hypolimnion. When a lake stratifies, the layers do not mix. The lower layers can become deprived of oxygen because they do not mix with the atmosphere.

During the fall, as the weather begins to cool, the density differences between the layers are reduced, stratification weakens, winds pick up, and the lake mixes again for a fall turnover. A less distinct density stratification than that seen in summer develops under the ice during winter. This pattern is typical for many lakes in Vermont; however, many shallow lakes do not stratify and are fully mixed throughout the year.

The concentration of dissolved oxygen in a waterbody can vary seasonally, depending on how strongly a lake is stratified. In fully mixed water columns that are not experiencing stratification, dissolved oxygen conditions tend to be high throughout the waterbody. In lakes that stratify, dissolved oxygen in the epilimnion (top layer) tends to remain high because of direct contact with the atmosphere. In the hypolimnion (bottom layer) dissolved oxygen declines during the summer because the bottom layer is cut-off from all sources of oxygen, while organisms that live there continue to respire and consume oxygen. The bottom layer of the lake may become seasonally anoxic, which means it is totally devoid of oxygen. When fall turnover occurs, the lake becomes mixed again and the dissolved oxygen content once again becomes more uniform throughout the waterbody.