Various aquatic invasive species control efforts have been implemented in Vermont, and many are ongoing. VTDEC permits many AIS control actions, and is directly involved in the implementation of others. Local governments, watershed and lake associations, and other individuals are also involved in a myriad of control efforts around the state. 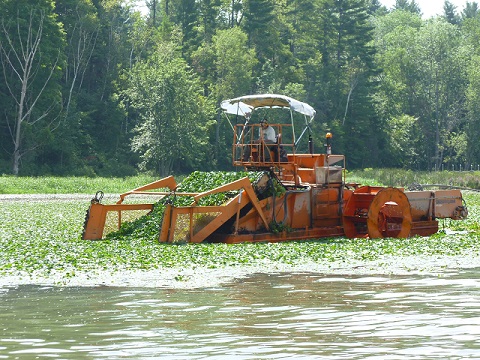 VTDEC aggressively manages water chestnut in Lake Champlain and a handful of inland water bodies, primarily on the western side of the state. Both mechanical and hand harvesting methods are used to significantly reduce the negative impacts of this invasive plant in Lake Champlain and other waters in Vermont, and to prevent further spread. Mechanical harvesting targets dense mats and is currently necessary only in southern Lake Champlain. Handpulling continues to be the main control method used at all sites. Notable progress in reducing water

chestnut populations has been made since efforts began in 1982.  Most significant is a reduction of the Lake Champlain population; dense mats have been reduced from Ferrisburgh south to Benson. Many partners contribute to water chestnut control success in Vermont: The Nature Conservancy Vermont Chapter, U.S. Fish and Wildlife Service, Friends of Missisquoi Refuge and the Lake Champlain Basin Program among others.

Control of Water Chestnut is Expensive!

Considerable taxpayer dollars are expended annually to control water chestnut in Lake Champlain and other Vermont waters. However leaving the problem untreated would lead to significant spread and result in losses to shoreline property values, decreases in recreational income from the lake and significant environmental impacts.  Funds for water chestnut management are appropriated from both federal and state sources.

The majority of Eurasian watermilfoil management in Vermont is borne by local entities, who dedicate considerable resources annually to manage this species.  VTDEC provides technical assistance and manages Eurasian watermilfoil in some waterbodies where a local entity is not available. Permitted control methods in use include mechanical methods (mechanical harvesting, diver operated suction harvesting), physical methods (benthic mats) and chemical treatments. Permits on notice for public comment can be found on the Vermont Environmental Notice Bulletin. Projects designed to manage or control Eurasian watermilfoil and other aquatic nuisance species are eligible for funding through DEC's Grant-in-Aid Program, and many towns use this grant opportunity to help fund watermilfoil management projects annually.