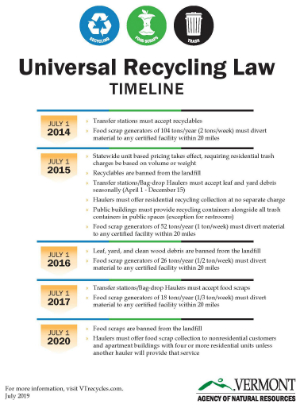 The law has been updated. Click these links to learn more:

Almost half of what Vermonters throw away could be diverted from landfills.

Only about 35% of Vermont's "waste" gets recycled, composted, or reused. The rest goes in the trash, and eventually to a landfill. That's on par with the national average recycling rate of 35% (U.S. EPA), and when the Universal Recycling law was passed, this rate hadn't changed for more than 10 years. The chart below shows what was in Vermont's trash in 2018 (by weight). Green categories can be composted and blue categories include many recyclables. If everyone recycled and composted, Vermont could cut its landfill waste by almost half. 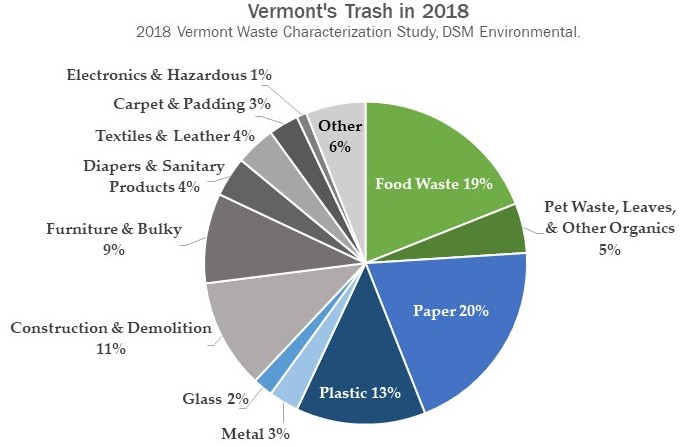 When food scraps end up in landfills, they release powerful methane gas that contributes to climate change. What's the use of landfilling uneaten food when we can feed our neighbors, feed animals to produce local eggs and meat, or create rich soil and renewable energy products instead? The Universal Recycling Law outlines how Vermont businesses and residents should prioritize what happens to food waste to achieve greater good: 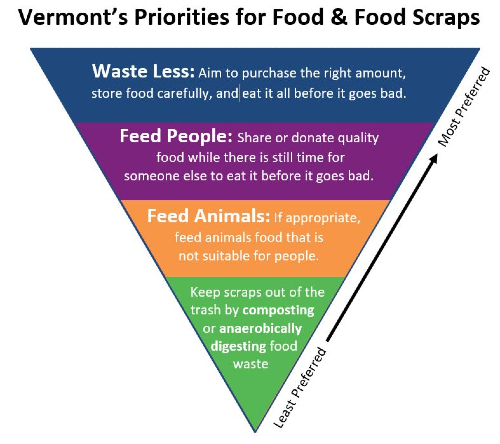 Main Features of the Law

Parallel Collection: Trash collection sites, such as transfer stations, “the dump”, and bag drops, must also collect blue-bin recycling and food scraps. Trash pick-up companies must offer recycling pick-up and must charge residential customers one combined fee for both trash and recycling. This way, households do not have to decide whether or not to recycle based on their wallets. Trash pick-up companies must also offer food scrap pick-up to nonresidential customers and apartment buildings with four or more residential units, unless another hauler will provide the service.

Unit-Based Pricing or "Pay-As-You-Throw": All Vermont towns had to require waste collectors to charge for trash based on its volume or weight. Similar to paying for the amount of electricity used instead of a flat fee, people in Vermont can pay less if they produce less trash.

More than a law. It's rethinking the future.

What if we could sustain regional markets that transform used office paper, cardboard, mail, envelopes, and magazines into new printing paper? Save colossal amounts of energy by placing aluminum cans and foil in the recycling bin instead of the trash? If everyone in Vermont recycles just six things, all the time, we can achieve a forty percent recycling rate---keeping 100,000 tons of valuable material from being dumped.

Learn more about how to recycle.

What if we could feed hungry Vermonters with surplus fresh foods from retailers and restaurants that can't be used, and help those businesses save money in the process? When your food is about to spoil, what if you thought about creating a rich soil amendment for your garden, supporting local egg production, or better yet...powering clean, renewable energy machines on Vermont dairy farms? This is the future of our uneaten good food and the kitchen scraps that get left behind. If everyone in Vermont composted or had their food waste collected, we can achieve a sixty percent recycling rate---and support our local food system and hungry neighbors.

Learn more about where your food scraps can go.