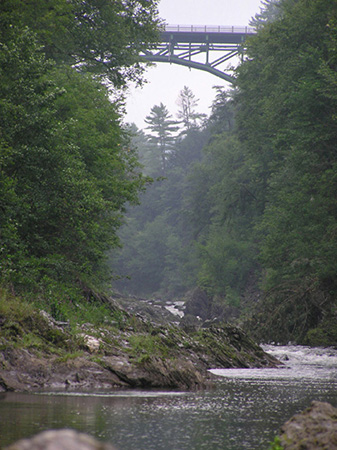 This photo is a view looking upstream towards the bridge. The metamorphic bedrock along which the river flows is the Gile Mountain Formation. The Devonian age formation is widespread in eastern Vermont. A Mesozoic mafic dike (augite camptonite), up to 220 cm wide, occurs along the west wall of the gorge and dips 62 degrees east (McHone, 1981).

Quechee Gorge, one mile long and 165 feet deep, is a narrow gorge on the Ottauquechee River in Hartford, Vermont. The gorge affords good exposure of the Devonian Gile Mountain Formation, here comprised of east-dipping, muscovite-chlorite schist and quartzite. A Mesozoic mafic dike occurs along the west wall of the gorge (McHone, 1981). The glacial deposits in contact with the Gile Mountain Formation were deposited as an ice-contact delta from meltwater streams flowing into glacial Lake Hitchcock. Lake Hitchcock, dammed in the south by a glacial moraine, extended from Connecticut nearly 200 miles north to the Canadian border, with smaller arms extending into present river valleys. When glacial Lake Hitchcock drained, the Ottauquechee River cut quickly through delta sediment, establishing the present course of the Ottauquechee River. Frederick Larsen (1985) estimates that the river cut through the delta sands in less than a week and has been slowly carving the gorge through bedrock for the past 13,000 years. 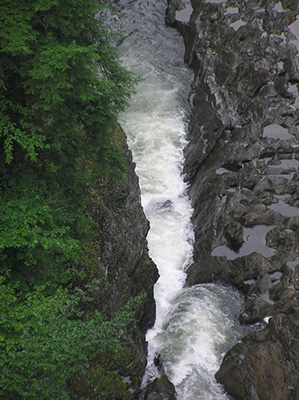 This view is looking downstream or south from the bridge. The steep dipping foliation is clearly visible. 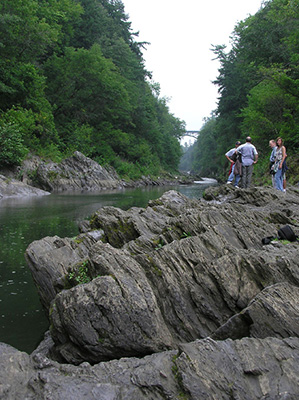 The steeply east dipping foliation in the bedrock is visible at the bottom of the gorge. A younger set of fractures cuts across the folded bedrock. 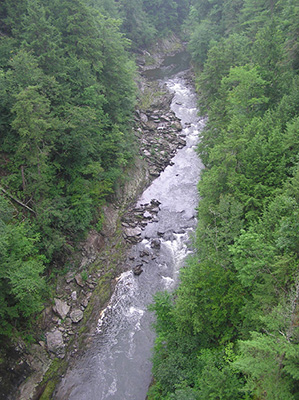 This view is looking upstream or north from the bridge. The river follows a fairly straight course nearly parallel to the dominant layering (foliation) in the bedrock. The foliation dips steeply to the east. 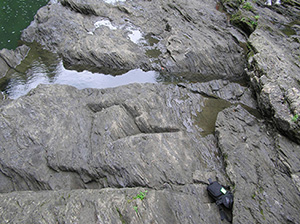 The dominant foliation in the folded, metamorphic rock is visible (runs from top to bottom of photo) and dips east. The younger fractures (run from left to right in he photo) cut across the foliation. Water flows along the foliation planes and along some of the fractures.