The mapping program produces bedrock and surficial geologic maps by town, quadrangle and watershed. It is funded through STATEMAP, an annual competitive grant process through the National Cooperative Geologic Mapping Program of the U.S.Geological Survey. The State Mapping Advisory Committee, comprised of legislators, consultants, geologists, and mineral industry personnel, meets with the State Geologist to review the map program and make recommendations concerning the goals of this project. The products developed through the map program provide fundamental sources of data to town planners, environmental scientists, government agencies, consultants, archaeologists, educators, industry and the general public. Vermont maps areas at 1:24,000 to address scientific and societal issues. Bedrock and surficial geologic maps at a scale of 1:24,000 are digitized and made available for release quickly on-line and/or as paper copy. Most of our recent publications are listed under Open File Reports and publications are also listed by town. 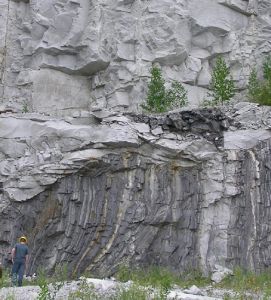 Why are we mapping the bedrock and surficial geology?
Vermont has a reputation for strong environmental programs and a philosophy which requires careful, planned growth. These programs have evolved such that the emphasis today is on protection rather than clean-up, planning rather than providing after-the-fact solutions. The geological environment is the host for Vermont's mineral and groundwater resources, as well as a receptor for contaminants. Providing easy access to current geological information is critical to the continued success of Vermont's environmental and growth-planning mission.

Vermont has produced abundant quality granite, marble, slate, talc, and asbestos as well as a variety of ores (copper, lead, sulphides) extracted during the nineteenth and early 20th centuries. Talc, the State Mineral of Vermont, and the three State Rocks-granite, marble and slate -continue to be marketable, high quality resources. Vermont rocks offer complex structures and chemistries which are being further defined and, in some instances, revealed for the first time by the new maps being produced. There are areas in Vermont of more concentrated population growth and development where issues of water supply and wastewater are critical.. The availability of new geologic digitized maps will not only answer significant questions of geologic history, but can also be applied to managing resources and balancing the impact of human activity with protection of the environment. Geology is an important layer of information that is applied to interpretations of environmental conditions both in the planning and problem solving stage. One can think of geology as being the base layer, and that understanding begins from the bottom up with a geological interpretation of regional and/or site conditions. 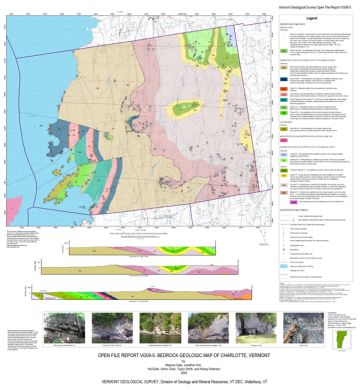 What is a bedrock map?
A bedrock geological map shows the type of intact, solid bedrock at or near the earth's surface. The map is used to predict the nature of the bedrock at depth or where it is obscured by surficial material (sand, clay, till etc). Geologists observe the exposed rock types and structures (folds, faults, fractures) in the field, sample the rock for microscopic(petrographic), chemical, and geochronological studies, then use this information to develop a three dimensional model of the underlying bedrock and to understand the depositional and deformational history of Vermont. A bedrock map generally includes rock descriptions, age relationships (stratigraphic sequence), and major and minor structural data used to portray a three dimensional model of the rock on a two dimensional topographic base map. Geologists use a variety of lines, symbols, and text to convey information in the form of a geologic map.

Most rocks originate as deposits of sediment along continental margins and in ocean basins, as volcanic extrusions, or as intrusive rocks at depth in the earth's crust. Rocks are usually folded, faulted, transported, metamorphosed, and form mountain belts at active plate boundaries during plate collisions. Rocks exposed at the surface are generally being eroded or destroyed slowly over time by wind, water and ice. All of these processes are evident in rocks of Vermont, and geologists use bedrock maps to understand the rocks and structures that are the record of more than one billion years of geologic time. 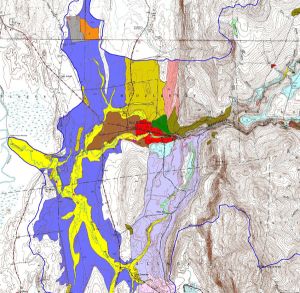 What is a surficial map?
The surficial geologic materials maps depict the type of glacial and other unconsolidated materials ( clay, sand, gravel, till, etc) overlying bedrock in Vermont. Many of the materials were deposited during glacial ice advance, retreat or in lakes and seas associated with these events, although some recent materials are deposited by rivers (alluvium in floodplains, small deltaic deposits etc); many have been modified by human activities. Maps are used to identify geologic resources, identify and evaluate physical hazards, and evaluate groundwater resources. 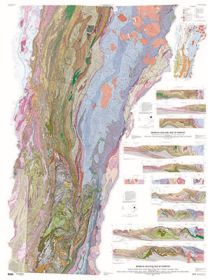 Geologic Map of Vermont [bedrock], 1861, Hitchcock and others

Geologic Map of New  Hampshire, 1997, Lyons and others