In April 1999, this landslide occurred along the east side of the Brewster River in Jeffersonville.  An estimated  27,000 cubic yards (Bierman and others, 1999) of transported material crossed the river and left a house stranded at the top of the bluff. The site is monitored by our Johnson State College and Norwich University partners. 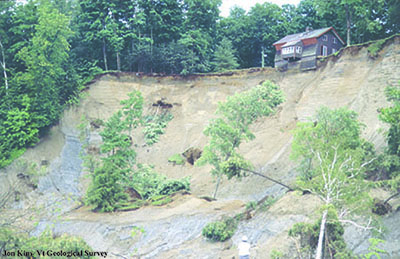 At the Jeffersonville landslide site, approximately 50' of silty clay deposited in a Pleistocene glacial lake are overlain by approximately 50' of fine deltaic sands that prograded northward into this glacial lake. Due to a pronounced permeability contrast, water tends to percolate through the sand and accumulate along the sand/silty clay interface.

North of the landslide, a nearly vertical clay bank rises from the level of the Brewster River and is overlain by fine sand. Some geologic factors that contributed to the Jeffersonville landslide are: 1) geologically heterogeneous materials 2) accumulation of water in these glacial sediments and 3) erosion of the west side of the Deer Run Heights ridge by the Brewster River. These conditions still persist in the vicinity of the slide. 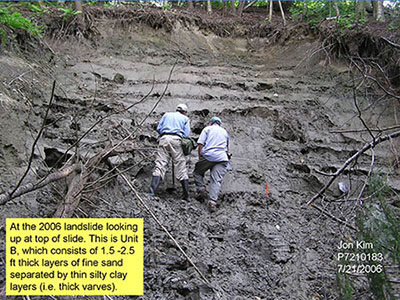 The presence of cohesive silty clay at the base of the Deer Run Heights Ridge allows for the development of steeper banks than would occur if this ridge was composed of non-cohesive fine sand alone. Because the cohesive clay is capable of holding up large volumes of overlying sand, larger landslides will result from this situation than from sand alone. As the river erodes into the clay, the development of oversteepened unstable banks is likely. The bank may fail catastrophically, bringing the overlying sand with it.

Due to a pronounced permeability contrast between the clay and overlying sand, water will tend to percolate through the sand and accumulate at the sand/clay interface. This water, in addition to increasing the weight of the clay, may lubricate the sand/clay interface and facilitate failure along this surface. The water in the clay, if under sufficient hydraulic head, may also lead to an increase in pore pressure along a buried surface and contribute to slope failure. 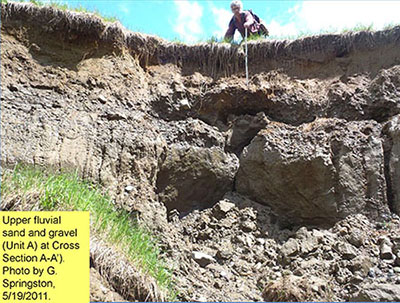 As with floods, earthquakes, volcanos, and other geologic phenomena it is not possible to predict with certainty when a catastrophic event will occur. Although landslides are often governed by complex geological factors, a set of "geoindicators" has been suggested by the International Union of Geological Sciences. Monitoring for the presence of ground cracks and, if present, any increase in their spacing, the appearance of and increases in ground subsidence or upheaval, and measuring the area of slope failure are all possible monitoring which may provide some insight into future potential failures.