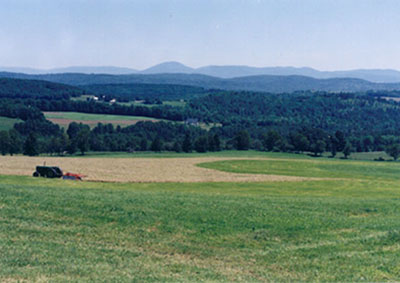 Photo 1: View from Coles Pond Road looking northeastward across the Sleepers River valley and the rolling hills of Danville. Burke Mountain is the prominent peak on the skyline. All of these hills were overridden by the Laurentide ice sheet during the Wisconsinan glaciation.

The Laurentide ice sheet. Our region was entirely covered by a large continental glacier known as the Laurentide ice sheet, which reached its maximum size about 24,000 years ago. This was the most recent of several ice sheets that spread over the area during the Pleistocene Epoch (about 1.8 million to 10,000 years ago). It stretched from Long Island back to its source areas in central Quebec and the eastern Hudson Bay Lowland and it buried the highest peaks of the Green Mountains of Vermont, the Adirondacks of New York, and the White Mountains of New Hampshire.

When the ice was at its maximum extent, world-wide sea level was about 400 feet lower than it is today due to the massive amount of water locked up in glacial ice around the world. In glaciated regions the tremendous weight of the ice depressed the land underneath. In this part of Vermont the land surface was depressed about 800 feet.

The Laurentide ice sheet slowly retreated across southern Rhode Island and Connecticut around 21,000 years ago. As the ice melted, worldwide sea-level quickly rose, and after a few thousand years, the Earth's crust began rebounding. The ice margin retreated into north-central Vermont by about 14,000 years ago.

Photo 2: Glacial Till exposed in the bed of Roy Brook in Danville. The mattock head is resting in the water of the brook. The stones in the brook bed to the left of the mattock head are glacially transported pebbles and cobbles which are actually part of the glacial till. Those to the right are loose stones which have been swept along by the current of the stream. The till here is very hard and is difficult to excavate, even with a mattock.

Glacial till. In the Danville/St. Johnsbury area there are steep, freshly eroded river banks which expose bluish-gray "clay" with stones in it. This is actually a variety of glacial till, the unsorted material left behind when the ice sheet retreated. This particular till is called basal till. The stones are of all sizes, from sand to huge boulders. The stones have rounded edges from the abrasion during glacial transport and many have flat sides (facets) where they were ground down on one side as they were scraped over the underlying land surface. Many will also show scratches on them where they were scraped against harder stones along the way. The matrix material around the stones consists of silt, clay, and some sand. If you try to dig into it with a shovel you'll see why a local name for this material is "hardpan". This material is hard for two reasons: First because the fine silt and clay grains pack together tightly and second because this material was deposited at the base of the glacier while the ice was still moving southward over it. Thus it has been highly compacted by the weight of the overriding ice.

The source areas of glacial till in the Danville/St. Johnsbury area. The stones in the till give us an indication of the bedrock types that the glacier has overridden during its journey down from the north. Studies have shown that glaciers pick up and drop material as they move along. Although this glacial ice moved from northern Canada, most of the stones are from less than 10 or 20 miles away, with only a very small fraction having moved more than 40 miles. Most of the stones found in glacial till in this area are of the local Waits River Formation, a dark gray metamorphosed limestone (an impure marble). One way to test for such lime-bearing rocks is to place a drop of dilute hydrochloric acid on the sample. If it is limestone or marble it will fizz vigorously. The remainder of the stones are mostly coarse-grained mica-bearing schist (another metamorphic rock) and granite (an igneous rock), both also of local origin. When unusual rocks are encountered in the till it is sometimes possible to trace them back to their bedrock source areas. In this part of Vermont such studies indicate that the ice moved in from the north or northwest.

Photo 3: Glacial striations on ledges alongside U.S. Route 2, Danville (Photo by Charles V. Cogbill). This is a view of a nearly horizontal glacially polished surface on top of a roadside ledge. The lines which run from top (north) to bottom (south) in the photo are scratches made by the stones held in the base of the ice sheet as it moved generally southward over the land. These glacial striations have a bearing of 184 degrees (almost due south). Fainter striations with an azimuth of 152 degrees can be seen running diagonally down to the right in the lower right-hand side of the photo. These striations cross-cut the 184 degree striations and are thus younger.

Glacial striations are easiest to see when the sun is low. Wetting the surface of the rock with a little water can make the striations show up much better.

Glacially polished surfaces. The surface shown in the photo is very smooth. The rock has been polished by the fine-grained rock fragments which make up much of the load of the glacier. Thus, the glacier generally tends to smooth and polish the surface of the rocks it grinds over. Glacial striations are caused by the larger stones, which gouge out grooves as they are scraped over the rock by the moving ice. In this part of Vermont it is uncommon to see such beautifully polished surfaces because the lime-rich bedrock weathers quickly. After the retreat of the glacier, this particular surface was protected by a covering of glacial till, which was removed when the highway was constructed.

Varves are annual layers of fine-grained sediment deposited into lakes in the vicinity of glacial ice. One pair of light and dark layers forms over the course of each year, the light layer being a relatively coarser-grained warm season deposit and the dark layer being a relatively finer-grained winter deposit. These varves formed in Glacial Lake Hitchcock, a lake which existed in the Connecticut Valley and some of its tributaries (including the Passumpsic River) at the close of Pleistocene Epoch. Since varves are annual layers, geologists can count them and determine how long the lake lasted.

Brick-making with Lake Hitchcock clay. The clay-rich portions of the lake deposits in the Connecticut and Passumpsic valleys were the raw material for a very important early industry: brick making. Clay was dug out from a pit or bank, mixed with a small amount of sand as a binder, shaped into bricks in wooden forms, and set out to dry. After partial drying, the bricks were fired in a kiln. Clay is a dense material and was difficult to move in large quantities in the days before trucks. Therefore, nineteenth century brick yards tended to be located on good deposits of lake clays. 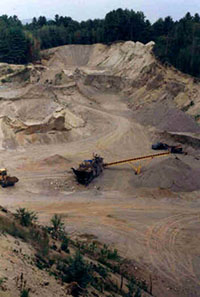 Photo 5: Sand and gravel pit excavated along the crest of the Passumpsic Valley esker in St. Johnsbury. View is looking north.

An esker is a long, narrow, often winding ridge composed of water-lain deposits of sand, gravel, and boulders which formed as a stream deposit in a tunnel within or at the base of a retreating glacier. When the glacier melts away, the snake-like ridge remains behind.

The Passumpsic Valley esker is one of the longest and finest in Vermont, if not New England. It extends from St. Johnsbury northward past Lyndonville, where it splits into two branches: One extending up the valley of the Sutton River to West Burke and the other extending on up the Passumpsic River valley to East Haven. In some places it is over 150 feet thick and two or three hundred feet wide. 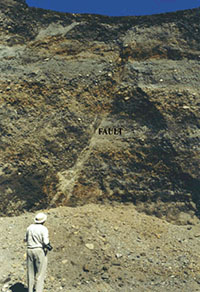 Photo 7: Closeup view of a fault in gravel in the core of the Passumpsic Valley esker. A fault is a fracture or break along which the two sides have moved relative to one another. Although faults are often thought of as forming in rock, they can also form in unconsolidated sediments. The fault in this photograph runs from the upper right to lower left. The fault probably formed as ice melted away from the sides of the esker, causing slumps and faults in the deposit.

Photo 10: High water at Emerson Falls, Sleepers River, St. Johnsbury. Here the Sleepers River tumbles down a ledge of bedrock, having eroded away any surficial deposits left behind by the glaciers.

Photo 11: Low water at Emerson Falls. The bold, resistant bedrock ledge here causes an abrupt change in the gradient or slope of the river. Such a spot is called a nick point. Until such time as the stream can erode its way through the resistant rocks which make up the falls, the bed of the river upstream cannot be lowered below the nick point.

Photo 12:  Pothole cut into bedrock at Emerson Falls. The notebook, for scale, is 7.5 by 4.7 inches. Potholes are formed by the scouring action of stones caught in eddies in the river. When the water is low, several excellent potholes can be seen. 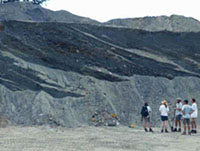 Photo 8: The sloping layers of sand and gravel behind the group of geologists are outwash deposits on the west side of the Passumpsic Valley esker. The layers dip to the west and formed as glacial meltwater streams carried sediment off of the glacial ice margin into the upper end of Glacial Lake Hitchcock. Similar deposits occur on the east side of the esker as well.

Photo 9: Varved lake deposit on top of the Passumpsic Valley Esker. This photo was taken directly beneath the Photo 5 site and shows varved lake deposits of silt and silty clay. The varves are cross-cut by faults which formed when ice on either side of the esker melted away, resulting in the partial collapse of the esker. The presence of the varves above the gravels and sands of the esker and outwash indicates that deposition of sediment in the lake continued for many years after the margin of the glacier had retreated northward towards Canada. Photo by Charles V. Cogbill.

Pielou, E.C., 1991, After the Ice Age: The return of life to glaciated North America: University of Chicago Press, Chicago, 366p.