The Geology of Belvidere Mountain, Eden and Lowell, VT

To the left is a view to the southeast from the summit (3360') of Belvidere Mountain in Lowell, Vermont. The view from above the asbestos quarry is towards Hadley Mountain, Mt. Norris and the Worcester Range. The area is characterized by a series of northeast trending ridges and valleys. Belvidere Mountain and Hadley Mountain are separated by the Burgess Branch of the Missisquoi River. Topographic relief is 823 meters. The area is also a drainage divide with the northern slopes of Belvidere Mountain draining north to the Missisquoi River and the southern slopes draining south to the Lamoille River.

Judge M.E. Tucker found asbestos in the area in 1899 (Marsters, 1905). In the 1960's, an average of 3500 tons of ore were mined daily (Hadden, 1996) with chrysotile asbestos used in brake linings, roofing, shingles and pipe lining. Asbestos related health issues and stringent environmental laws depressed the asbestos market and the mine closed in 1993. The mountain continues to capture the interest of mineral collectors, hikers on the Long Trail, ecologists studying plant communities related to the high magnesium, iron and calcium-rich rocks, scientists investigating ways to store or "dispose" of excess carbon dioxide (CO2 sequestration), and others interested in the magnesium rich rocks. For regional geologists, the area is interesting due to the occurrence of the ultramafic rock within the ophiolite belt of the northern Appalachians, its association with a variety of metamorphosed mafic rocks, and the structural and metamorphic history. Grossular, the Vermont State Gem, is found at Belvidere Mountain along with 40 or more other rock-forming minerals. For a complete list of minerals (plus photographs) , history of the quarries, and health-related issues the reader is referred to Hadden (1996), Van Baalen and others (1999) and Carlsen and others (2015). 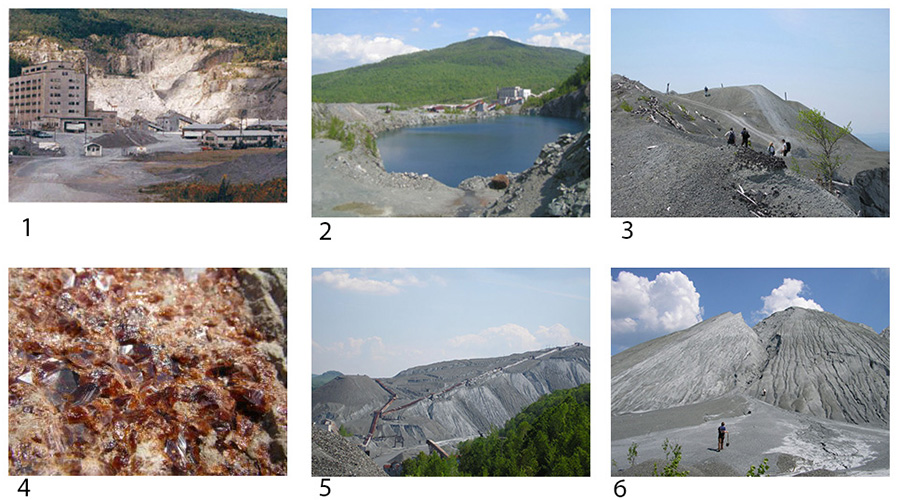 Chidester, Albee and Cady (1978) mapped the geology of the ultramafic rocks and the quarries. They mapped dunite, peridotite, and massive serpentinite surrounded by schistose serpentinite in the quarry. Asbestos * is present as slip fiber and cross fiber. Layering is prevalent in the massive rock. Talc-carbonate and quartz-carbonate rock were also mapped. Serpentinite and serpentinized ultramafic rock refer to the rock - serpentinized dunite, harzburgite and/or peridotitite. There are also Serpentine Group minerals and these include antigorite, lizardite and chrysotile. Some of these serpentine group minerals have a fibrous or asbestosform habit. The most common serpentine group mineral making up the serpentinized ultramafic rock in the quarry is antigorite. Chrysotile (the mined asbestos mineral at Belvidere Mtn.) is less common in the groundmass and tends to occur along fractures and slip planes. Actual minerals within each rock are difficult to identify without looking at a thin section or having an x-ray pattern. Chidester et al reported modal analyses of 23 samples of dunite, serpentinite and schistose serpentinite. 5 samples reported chrysotile with modes ranging from <1 to 13.2. The large waste piles at Belvidere Mountain are the result of the low modal values of ore in the host rock.
*(Asbestos is the name given to a number of naturally occurring, fibrous silicate minerals mined for their useful properties such as thermal insulation, chemical and thermal stability, and high tensile strength. Asbestos is commonly used as an acoustic insulator, and in thermal insulation, fire proofing and other building materials. Many products in use today contain asbestos. From: US EPA web site)

Doolan and others (1982) and Stanley and others (1984) considered the ultramafic rocks to be ophiolite fragments or fault slivers. Gale (1980, 1986) mapped the area south of the summit, focusing on the metamorphosed mafic rocks and defined several fault surfaces. She mapped the Belvidere Mountain Complex which includes, from top to base, serpentinized ultramafic, coarse-grained amphibolite and garnet amphibolite, fine- grained amphibolite, greenstone, and muscovite schist (muscovite schist with small to large rounded blocks of amphibolites and greenstones). The mafic rocks define a tectonic stratigraphy underplated at the base of the serpentinite and emplaced onto the albite gneiss of the Hazens Notch Formation. 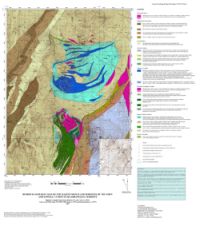 The Belvidere Mountain Amphibolite was originally named by Keith and Bain (1932) for the amphibolite on Belvidere Mountain. Albee (1957) mapped the greenstone south of the mountain as part of the Belvidere Mountain Amphibolite at the top of the Camels Hump Group, below and west of the Ottauquechee Formation. The coarse grained amphibolite, exposed at the summit and above the silos on the east flank of the mountain, is a dark gray, banded massive rock composed of amphibole (barroisite cores, barroisite rims, (Laird, 1977) ), epidote and garnet with lesser amounts of albite, chlorite, sphene, sericite, biotite and calcite. Calcite is present as aggregates giving some outcrops a speckled appearance. Garnet occurs as pale red or green porphyroblasts, depending on the amount of alteration to chlorite. The parallelism of amphibole laths defines the dominant lineation. The maximum thickness of the amphibolite, assuming 100% repetition by folding, is 60 meters. 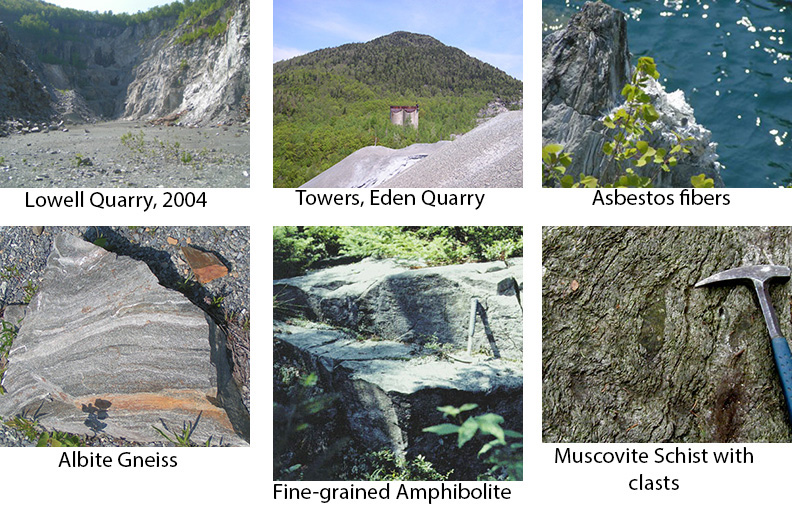 The greenstone is a fine-grained, blue-green metamorphic rock with albite porphyroblasts in relief on the weathered surface. The rock is composed of amphibole, epidote, quartz, chlorite, albite, biotite, sphene and opagues including pyrite and magnetite. Some chlorite occurs as a pseudomorph of garnet. The unit includes albitic greenstone, a schistose greenstone and a light and dark green banded greenstone (exposed on Route 118). The textural variations in the rock do not define separable map units and occur together within single outcrops. 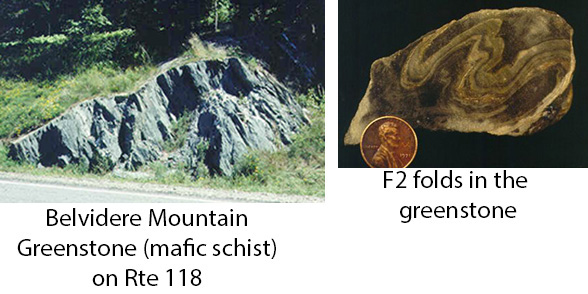 Some suggested references for the geology of Belvidere Mountain: