Geologic Scenery in the Montpelier Quadrangle

PATTERSON BROOK DELTA. Close-up view of the topset-foreset contact in the Patterson Brook delta. Both topset and forset beds are composed of pebble gravel, fine sand, very fine sand and silt. Abrupt changes in grain size across layer boundaries in both topset and foreset beds indicates rapid changes in flow regime at time of deposition.

CULVER ROAD TILL CUT. Culver Road till cut, a roadside exposure of brown sandy till derived mainly from the Moretown Formation. Four feet of till and colluvium rest upon one foot of clayey lake-bottom deposits. The site is interpreted as evidence that the last ice sheet rode over its own proglacial lake-bottom deposits on its southward advance to Long Island. 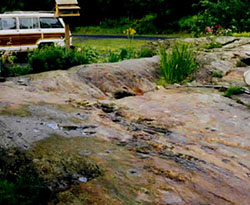 MELTWATER SCOUR MARKS. Meltwater scour marks on the lee side of a roche moutonnee (stoss and lee topography) formed by the ice sheet in a quartzite outcrop of the Moretown Formation. The ice sheet moved obliquely to the right and toward the observer and abraded smooth the top of the roche moutonnee. During deglaciation, meltwater moving rapidly in a thin sheet between the ice and the bedrock carved the pothole-like structures below the knife. The site is located west of the Doty School in Worcester. 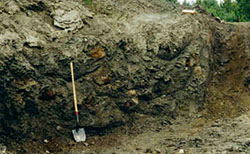 SANDY TILL. Temporary exposure of sandy till derived mainly from the Waits River Formation. Many of the brown clasts are calcareous quartzite from which a calcite matrix has been dissolved by ground water, leaving a "phantom", a loose or partially cemented sand. The phantoms are easily disaggregated by shovel or hammer. The site is approximately 4 miles N86E of the Vermont State Capitol. 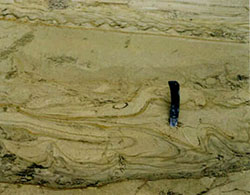 SOFT SEDIMENT DEFORMATION. Soft-sediment deformational structures at a depth of 15 feet (sand portion) in the Butternut Brook stratigraphic section. The view is to the north-northwest of a scraped surface that slopes steeply toward the observer. This is the upper of two packages of sediment that were deformed during sedimentation. Fold axes trend north-northwest and deformation was from the east-northeast to west-southwest. The sediments are interpreted to be prodelta lake-bottom deposits associated with slumping of foreset beds of a glacial Lake Winooski delta that has been mostly removed by erosion. Units on the black and white scale in the photograph are 10 cm in length.

SORTED PEBBLE GRAVEL. View looking south in a depleted pit 3 miles north of the Vermont State Capitol. About 3.6 feet of poorly sorted pebble gravel rest disconformably upon 5.3 feet of interbedded fine sand and fine pebble gravel. On the right, layers are flat at the bottom and dip 15 degrees east just below the contact with the overlying pebble gravel. The latter is interpreted to be a debris-flow deposit formed in association with a large flood. These beds were mapped as terrace/fan deposits that formed after glacial Lake Winooski drained and before the present stream system incised lake-bottom sediments. 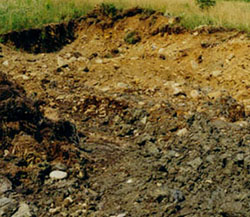 TERRACE/FAN DEPOSITS. Terrace/fan deposits on lake-bottom deposits in Worcester Village. An exposure with two feet of orange-brown pebble gravel resting directly on six feet of varved silt and clay was observed in a temporary excavation just to the left of this photo in June 1998. The site is 0.18 mile N65W of the Doty School. 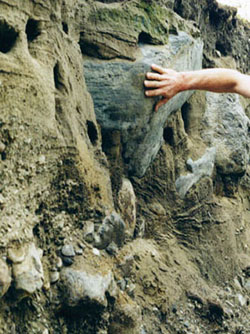 DIAMICTON. The diamicton is interpreted to be a mudflow deposit on an alluvial fan. Location is the same as the pit above. 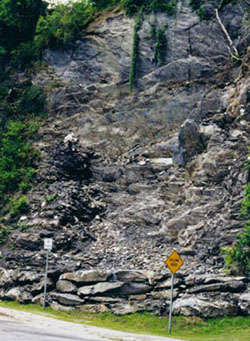