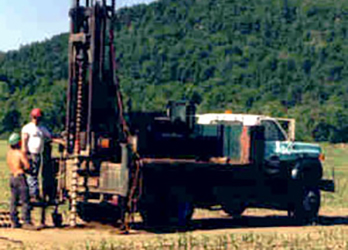 Introduction
Geologists use many different techniques to explore the Earth. For studying sediments that have not been hardened into rock (unconsolidated deposits), much useful work can be done with shovels and other hand tools, especially if there are natural stream valleys or human excavations which expose the materials. However, if there isn't a convenient stream valley or building site nearby, the geologist has to use other methods. Two methods used in the recent surficial geologic mapping of the Newbury quadrangle by the Vermont Geological Survey are geotechnical borings and seismic refraction surveying. The completed map can be found in the reference below:

Geotechnical Borings
Geotechnical borings in unconsolidated material are usually done with a hollow-stem auger. The hollow-stem auger is a heavy steel auger which is screwed down into the Earth by a truck-mounted drilling rig. Each section of the auger is five feet long and a series of sections can be attached together to go down 75 feet or more. The auger is hollow in the middle to allow a two-foot-long steel sampling tube on the end of a long rod to be dropped down in the hole. When the sampling tube reaches the bottom of the hole, the end of the sampling rod which sticks up out of the ground is pounded down about two feet so as to force the sampler out below the bottom of the auger. The sampling tube is made so that sediment can be pushed up into the bottom but will not fall out when the sampler is pulled back up. The sampling rod and tube are then pulled up with a winch mounted on the tower of the drill rig. The sampling tube is removed and opened lengthwise, revealing the sediment sample inside. 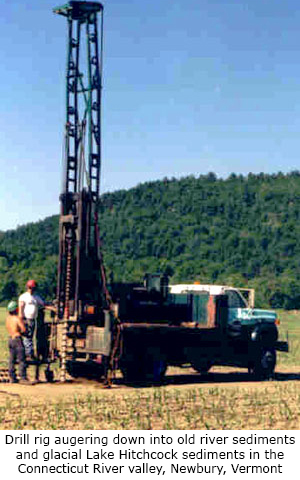 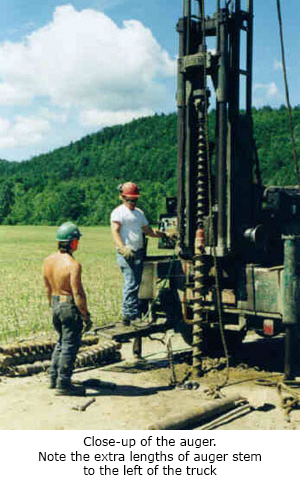 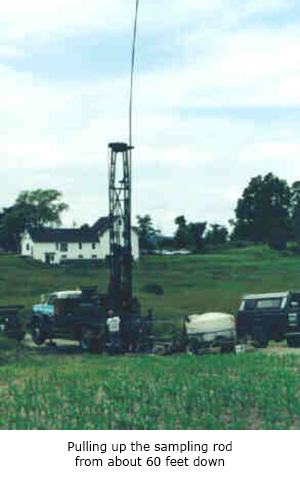 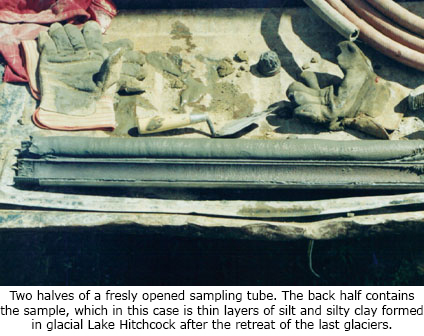 Seismic Refraction Surveying
Seismic refraction surveying uses an energy source such as a sledgehammer blow or a small explosion to set up a series of vibrations in the upper layers of the Earth. For this project, a sledgehammer was used. The seismic waves from the hammer blow move outward in all directions through the Earth. Because different materials can transmit these waves at different speeds, waves are refracted when they reach boundaries between geological layers with different seismic velocities. A few of these come back up to the surface of the Earth and can be detected with special microphones called geophones. The geophones are spaced out along a cable which is several hundred feet long. The signals from all of the geophones are fed into an electronic seismograph which records and displays the results. The signals can then be analyzed to determine how fast sound waves move in the layers which the waves passed through. From the speed with which the waves move, the geologist can estimate what types of materials are present. This method is particularly useful for determining the depth to ledge, since the seismic waves normally travel much faster in hard bedrock than in any of the common unconsolidated sediments. 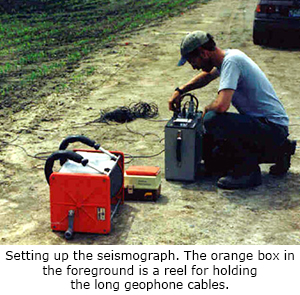 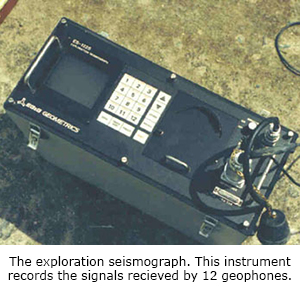 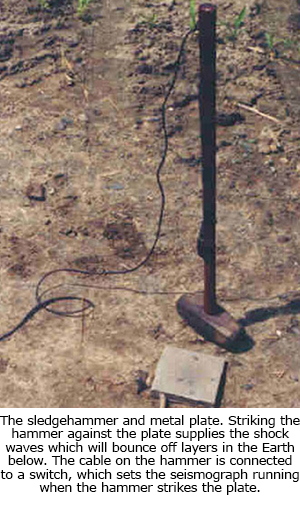 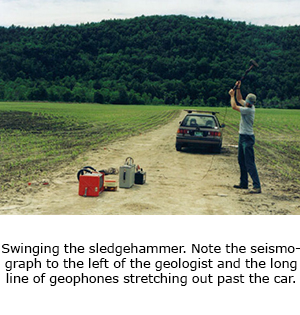 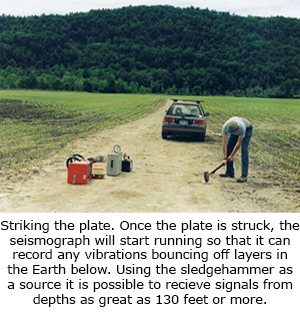 Many thanks to the Geology Department of Norwich University for the loan of the seismograph equipment used in this study.