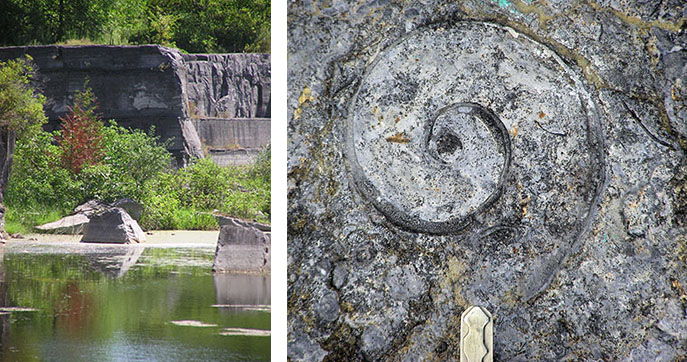 There is a tremendous range of definitions for what constitutes a "reef", from the liberal "anything that would break the bottom of a boat" to those definitions which require recognition of the ecological relationships between organisms. Following the discussion of James and Bourque (1992) the Chazy buildups are most appropriately termed "mounds" and not reefs due to the carbonate mud matrix surrounding the framework organisms. The sediment between the mounds is coarser-grained, often cross bedded packstone and grainstone. The mounds were capable of building vertically into the surrounding water column, and thus modified their surrounding environment. These rocks are often called "The World's Oldest Coral Reefs" (Raymond, 1924), but could be more appropriately termed "The World's Oldest Reefs in Which Coral Occur," but that's a little wordy. Although coral are present, they were recent developments in the biotic world and were not the dominant framebuilder. Bryozoa and stromatoporoids were more successful builders of the reef, along with stromatolites. Non-framework organisms are diverse and include echinoderms, brachiopods, gastropods, trilobites and cephalopods; the usual cast of characters in the Middle Ordovician seas.

The faunal changes through the Chazy reefs have been identified as representing "succession" in the reef community over time (Pitcher, 1964). In many reefs, the initial framework builder, for example, bryozoa, are vertically capped by another framework builder, for example, a stromatolite. In other words, over the lifespan of a reef horizon the environment was best suited for the morphology and function of one group of organisms, and as the buildup accreted into shallower water, another group of organisms was better adapted to this new environment.

Since Pitcher's paper, paleontologists' understanding of succession has deepened and they now differentiate between "allogenic" and "autogenic" succession. Autogenic succession represents faunal or floral changes which were internally driven by progressively better adapted groups of organisms (pioneer-diversified-climax communities). Allogenic succession is interpreted to represent faunal or floral changes in response to external changes to the environment. In the case of a reef, sea level change would be a prime example of an external change.

The significance of recognizing reefs or mounds of Ordovician age in Vermont is great. First, the occurence of reefs in modern environments at 20-30 degrees parallel to the equator provides a strong paleo-latitudinal control for this portion of Vermont 460 million years ago. Second, the narrow bathymetric control on modern reefs provide us with a constraint on water depth for these rocks. Third, the detailed orientation of the mounds (roughly aligned in a north-south belt using current geographic coordinates) constrain the local paleogeography: the Iapetus Ocean was to the east, Laurentia lay to the west, and this region sat on the platform margin bordering deep water. 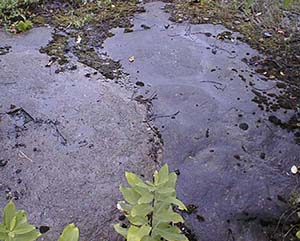 Contact of mound (right) and sediment (left), Day Point Fm, middle-upper Fleury member
The mounds are circular to elliptical in shape. They can occur as isolated, mushroom-shaped buildups or as laterally-linked and coalesced mounds. The bryozoa appear to have been able to stabilize the mobile substrate and trap micrite mud within the framework, and build vertically in a series of layers. Initially the mounds accreted vertically (growth rate greater than accumulation rate) as isolates. Then, the sedimentation rate increased relative to growth rate and the Bastoma layers extended laterally and linked with an adjacent mound. 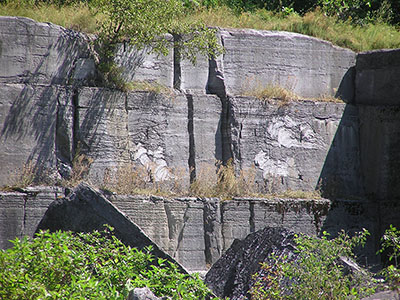 Quarry Wall and Stromatoporoids
The mounds or reefs of the Crown Point Formation are of much higher faunal diversity than the underlying Day Point buildups, with varying abundances of algae, stromatoporoids, sponges, coral, bryozoa and stromatolites as the framebuilders. Stromatoporoid (Pseudostylodictyon lamottensis) mounds are visible on the quarry walls, and the mounds resemble cabbage heads. The mounds are convex upwards, but are not symmetrical in cross-section. By analogy to modern organisms, geologists interpret water flow direction to be up, onto and against the steeper, buttressed sides of the mounds. The nearly horizontal bedding planes are also visible in the quarry walls. 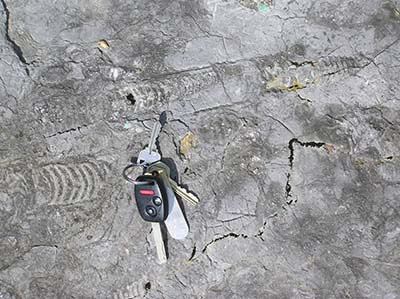 Cephalopod, Crown Point Fm.
Cephalopods are related to gastropods. Cephalopods lack feet and their shells are chambered. By locating the shells of cephalopods, shaped like small wind socks, it is possible to tell which way the water was flowing in the channels that cut through mound horizons. The channels were conduits for water to move from the open ocean through the reef front into the lagoon behind. The grooves or channels are oriented perpendicular to the oncoming wave surge. 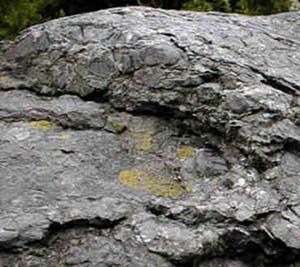 Mound, upper Crown Point Fm.
Very little framebuilder is needed to create a structure which can be termed a reef or mound. Most of what is present in a reef, modern or fossil, is inter-reef rubble and pore-filling sediment. 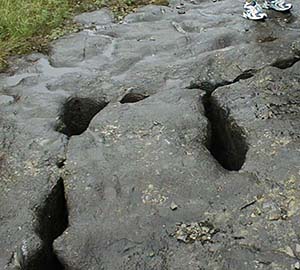 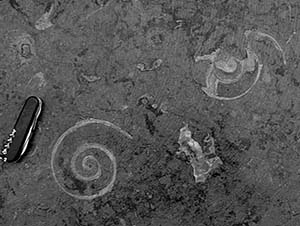