Mercury and Other Persistent Pollutants

Vermonter's are fortunate to have lakes and ponds that, for the most part, clean, clear, and enjoyable. When admiring the vistas from Lake Willoughby, cooling off on a hot summer day at Sunset Lake in Benson, or fishing Somerset Reservoir, it is tough to imagine that VT has a problem with heavy metals like mercury, or with other persistent organic pollutants such as PCB's and DDT. Unfortunately, though, contamination of our lakes by mercury is widespread throughout the state, and contamination by other persistent chemicals, while scattered, is indeed a problem.

Luckily, we are not exposed to these chemicals while swimming in our waters, or by drinking appropriately treated water from lakes and streams. However, mercury and persistent organic compounds do not readily degrade, or leave aquatic systems. They are persistent because once they get into a lake's sediments, they are there to stay.

Mercury (Hg) contamination is ubiquitous in Vermont's still waters. Hg is a naturally occurring metal used in a wide variety of applications ranging from the production of household bleach to the mining of gold. Hg is released into the environment either directly to water via waste systems, or much more commonly, directly to the atmosphere. It is this atmospheric pathway that is largely responsible for Hg contamination in VT. The combustion of coal for energy production, and incineration of municipal and medical wastes, produces the majority of Hg deposited onto the watersheds of the northeastern US and Eastern Canada.

In the atmosphere, Hg undergoes a wide variety of chemical transformations, eventually settling to the landscape as Hg attached to particulate matter such as soot. Once on the ground, Hg migrates through watersheds, arriving eventually into receiving waters (e.g. wetlands and lakes). Hg that is moving through watersheds is subject to myriad chemical transformations, and these are often biologically mediated. The most important of these biological transformations is the generation of methyl-mercury (meHg). MeHg is a highly toxic form of Hg, which is easily assimilated into tiny planktonic organisms at the base of aquatic food chains. Through the processes of biomagnification, minute concentrations of meHg are passed up food chains, increasing to levels that pose a significant threat to those organisms feeding at the top of the aquatic food web. Organisms which are at risk of meHg exposure include top-level carnivorous fish such as walleye, fish-eating birds such as eagles and loons, and, of course, humans. It is noteworthy that some fish species are better at getting rid of their meHg burden than others, which is why the Vermont Department of Health (VTDOH) fish consumption advisories are species-specific. In addition, certain lakes appear to have conditions that result in more efficient transfer of meHg up the food chain. This is why the VTDOH advisories identify a select few waterbodies as having particularly elevated fish-tissue Hg concentrations, where eating resident fish carries a greater level of risk. The physiological consequences of meHg contamination include liver, kidney, and central nervous system dysfunction. A recent study by the National Academy of Sciences concluded that the children of woman who consumed large quantities of Hg-tainted fish during pregnancy showed the clearest evidence of mercury poisoning.

Due to Hg contamination, the VTDOH presently advises that people limit their consumption of a variety of fish found in Lake Champlain, and in many other lakes statewide. To learn more check out the current fish advisory and read What Anglers Should Know About Mercury Contamination.

Persistent organic pollutants often contain relatively high quantities of chlorine in their molecular structure, rendering them particularly resilient to degradation in aquatic environments. Poly-chlorinated biphenyls, or PCB's, are one such contaminant that has been found in sections of Lake Champlain. In the past, PCB's were used for a variety of chemical processes including the production of plastics like PVC piping. PCB's were also commonly a component of power transformers mounted on power poles. In Burlington, these transformers were voided of PCB's during the late 1980's. Presently, there exist stores of PCB's in landfills nationwide. PCB's can escape into the environment either by waste incineration, or via landfill leachate to the groundwater. PCB's move through the landscape in a very unpredictable fashion, often cycling from terrestrial or aquatic environments into the atmosphere, then back to the landscape at a different geographic location. This type of unpredictable movement is known as the 'grasshopper effect.' Like meHg, PCB's also bioaccumulate, increasing in concentration with each step up the food web. To date, testing performed by the Watershed Management Division, in concert with the Vermont Department of Fish and Wildlife, has uncovered PCB contamination only in the tissues of large lake trout from Lake Champlain. PCB's are known by USEPA to be carcinogenic to animals, and are considered likely human carcinogens as well.

Other noteworthy persistent organic pollutants that are problematic nationwide, and could be found in Vermont's aquatic environments, include DDT (and its related breakdown products), dioxins, and cadmium. DDT (dichlorodiphenyltrichloroethane) was once a widely used pesticide that has been banned from use in most western countries, although it is still produced in the U.S. for distribution to other parts of the world. DDT is extremely persistent in any of three related compounds (DDT, DDD, and p-p'-DDE), and these have been identified in a very few older and very large fish from Vermont waters. Dioxin is a compound that is not produced per-se, but is a chemical by-product of several chemical manufacturing processes. Sources of dioxin include wastes from the manufacturing of pesticides, pulp mill effluents, and the incineration of plastics. Cadmium is a heavy metal that is used in metal fabrication, galvanizing, and electroplating. Cadmium is often released to wastewater treatment facilities, and recent scientific studies have also suggested that cadmium can travel through the atmosphere, thus contaminating areas far from its point of origin. Little is known in Vermont about the distribution of dioxin and cadmium.

The Watershed Management Division is currently engaged in a large study regarding mercury contamination in lakes. The goal of the study is to understand which lake types have mercury contamination in fish that is elevated above statewide norms, and which lakes show reduced contamination. Such information can be used to refine fish tissue consumption advisories, ultimately directing the angling public to lakes that have less mercury. Click here for details about the design of the study. In addition, the Agency of Natural Resources has an active program to remove mercury from the Vermont waste stream. Under the aegis of Vermont law (10 V.S.A . section 6621), and in coordination with the Vermont Advisory Committee on Mercury Pollution, the Agency is actively enforcing existing statutes, conducting rulemaking, and developing legislative proposals for the proper management of Vermont's mercury-containing wastes. More information about these efforts is available from the Vermont Mercury Education & Reduction Campaign. 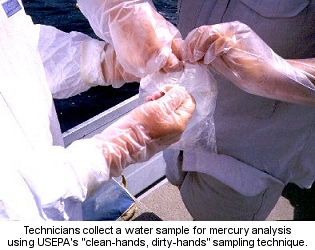 Detailed information about the human health effects associated with Hg, PCB's, DDT, and other compounds is available at the EPA's website. Another excellent resource is the National Pesticide Telecommunications Network. A WWW search on the terms "persistent organic pollutants" will yield literally hundreds of useful pages.

For more information about mercury and other persistent organic pollutants in Vermont's waters, contact Neil Kamman.