The saturated or seasonally saturated conditions in wetlands create an environment that favors the growth of specifically adapted wetland plants (hydrophytic vegetation) and promotes the development of wetland soils (hydric soils). These three factors (hydrology, vegetation, and soils) are used in wetland identification and in the delineation of wetland boundaries.   According to Section 3.2 of the Vermont Wetland Rules: "The boundary between a wetland and an upland shall be delineated by the methodology set forth in the 1987 edition of the Corps of Engineers Wetlands Delineation Manual. This methodology employs three parameters: vegetation, soils and hydrology. One function of the Vermont Wetlands Program is to field check delineations made by wetland consultants. The following links will provide more information about wetland delineation in Vermont.

Wetland hydrology refers to the timing and extent of flooding or soil saturation and is considered to be the "driving force" in wetland formation. Rainfall, soil permeability, position in the landscape, surrounding land use, and type of vegetation all influence the hydrology of a wetland. Although hydrology is the most important of the three wetland parameters, it can sometimes be the most difficult factor to determine in the field because water levels in wetlands are often highly variable in the course of an average year.

Wetland plants, or hydrophytic "water loving" vegetation, are those plants which have adapted to growing in the low-oxygen (anaerobic) conditions associated with prolonged saturation or flooding. These plants have adapted to anaerobic soil conditions by evolving alternative methods of collecting oxygen such as the enlarged pores (lenticels) in the bark of speckled alder, the hollow stems of rush and grass species, and the air-filled cells (aerenchyma) in the roots of cattails. 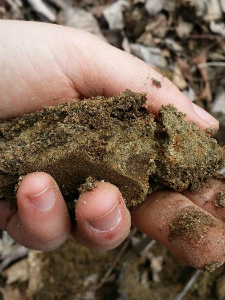