The Monitoring and Assessment Program conducts various assessment and listing activities to characterize the quality of Vermont's surface waters:

Assessment of the Condition of Vermont Waters 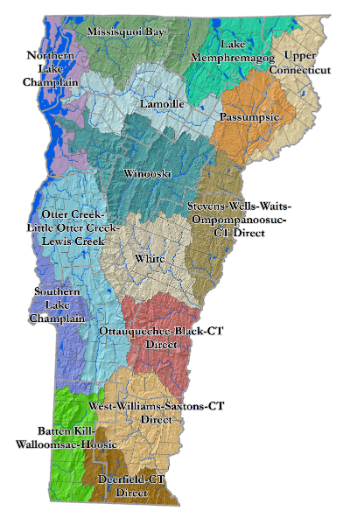 In accordance with the federal Water Pollution Control Act (also known as the Clean Water Act), the Monitoring and Assessment Program periodically assesses the quality of Vermont’s surface waters using the Surface Water Assessment and Listing Methodology. Through the assessment process, program scientists interpret water quality monitoring information from sites within an area of interest, and, where appropriate, relate that information to causes of observed problems and sources of pollutants. Assessment results are published in tactical basin plans on a rotational basis, with three plans published annually. Individual Basin Assessment Reports are no longer published separately from tactical basin plans. Assessment results are also published in the Section 305(b) Water Quality Integrated Assessment Report.

​Section 305(b) of the Federal Water Pollution Control Act (also known as the Clean Water Act or CWA) requires each state to submit a report about the quality of the state's surface and ground waters to the US Environmental Protection Agency (EPA) on a biennial basis.

For the purposes of identifying and tracking important water quality problems where the Vermont Water Quality Standards (VTWQS) are not met, VTDEC has developed the Vermont Priority Waters List. This list is composed of several parts, each identifying a group of waters with unique water quality concerns that are either impaired or altered:

Altered
Part E: These waters are assessed as altered where aquatic habitat and/or other designated uses are not supported due to the extent of invasive aquatic species.
Part F: These waters are assessed as altered due to hydrologic factors.  These often include a lack of flow, water level or flow fluctuations or some other modified hydrologic condition.

Part A: 303(d) list of Impaired Waters
Part B: Impaired waters for which a TMDL is not required
Part D: Impaired surface waters with a TMDL

Stressed Waters List (These waters have been assessed as stressed where stressors are present that prohibit the waters from attaining higher water quality.)

Pursuant to 40 C.F.R. §130.7(b), the State may use a Water Quality Remediation Plan (WQRP) in lieu of a TMDL for an impaired water when the State determines that the pollution control requirements of the WQRP are stringent enough to meet State Water Quality Standards within a reasonable period of time. The WQRP procedure is described here.

*Note: Rock and Pike Rivers were included in the 2003 report, but are addressed as part
of the Missisquoi Bay Basin in subsequent assessments.

*Note: Rock and Pike Rivers were included in the 2003 Northern Lake Champlain Basins report, but are addressed as part of the Missisquoi Bay Basin in subsequent assessments.

*Note: Only the Black and Ottauquechee Rivers were included in the 2000 report, but adjacent CT River direct drainages will be included in subsequent reports.

*Note: Only the West, Williams, and Saxtons Rivers were included in the 2001 report, but adjacent Lower CT River direct drainages were assessed separately in 2002 and 2014, and will now be included in subsequent reports.

*Note: The Lake Memphremagog Basin includes two international watersheds (the Tomifobia and Coaticook Rivers) that do not flow directly to the lake, though are also part of the greater Saint Lawrence River Basin.