The CWSRF and DWSRF programs each write an annual Intended Use Plan (IUP) in order to obtain the capitalization grant from USEPA for program funding. An integral part of each IUP is the Priority List (PList), which is a list of projects that have requested funding that year and are ranked according to the priority system for the program. To obtain funding for all construction (Step III) work and certain CWSRF final design activities, a project must either be included on the priority list, or be accepted as an "emergency" project, and meet readiness to proceed criteria.

The DWSRF maintains a priority list for each capitalization grant in order to ensure that all program requirements for an individual capitalization grant are met. CWSRF maintains a single priority list at any given time and the priority list is replaced annually. Projects that do not execute a loan in a given year must reapply to the next year's Priority List to maintain funding eligibility. In certain circumstances, projects from a previous year's PList may be included as a continuing project on the next year's list. The CWSRF program prefers to track projects at all project development levels on the PList, because it ensures that funding is available for planning and design project needs as well as to track the need for Pollution Control Grants.

It is important to remember that your priority list application is NOT your loan application.

Each priority list ranks projects by their "priority" with respect to other projects on the list. Projects with the highest number of priority points are ranked towards the top of the list. All projects are added to the list but only the top projects are considered to be in the "fundable" range. However, there is a bypass process for "emergency projects" and when projects in the fundable range are not meeting readiness-to-proceed criteria.

Both SRFs have an emergency projects process. Applicants either on or off the Priority List that experience an emergency resulting in an imminent and substantial threat to the public health may bypass all other projects and may be assigned top priority. Emergency additions to the Priority List will result in the lower priority projects identified as Anticipated Loan Recipients being bypassed. The number of projects bypassed will depend upon the amount of funds needed to cover the emergency. The determination of an imminent and substantial health risk for cases involving chemical contamination or a potential disease outbreak is the responsibility of the Department of Health in consultation with DEC. The determination of an emergency situation resulting from an unanticipated water or wastewater system failure which requires immediate attention to protect the public health is the responsibility of DEC. Projects that may be required to address such a health risk could involve installation of treatment facilities, construction of a new water source, or replacement of a failed system element. For more information, please refer to Guidance Document #16.

Each priority list may be amended up to two times annually. If a project requires the PList to be amended, please contact the respective SRF Project Lead. 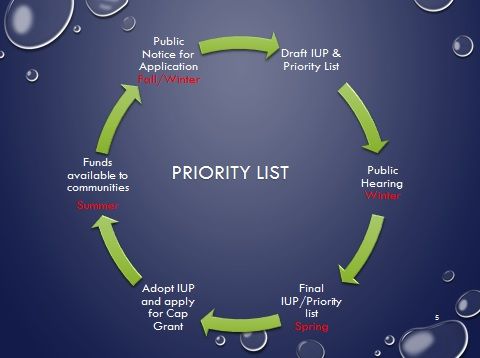