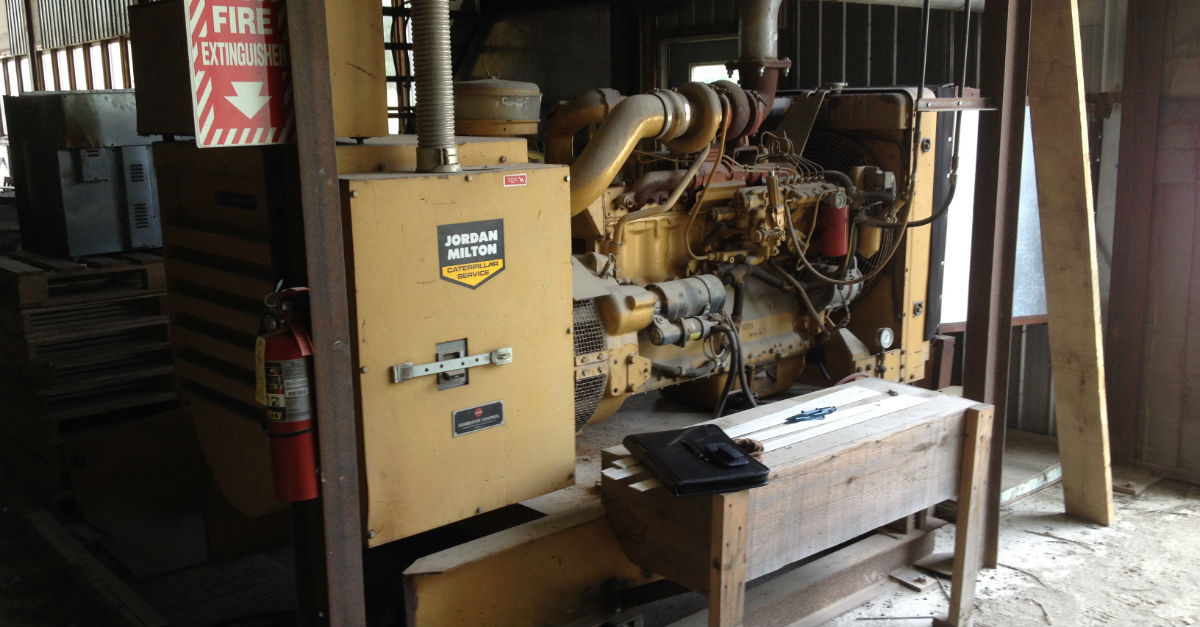 Do I Need a Permit to Install a Diesel Engine such as a Generator?
Permit applicability will depend primarily on the horsepower rating of the engine, and the intended use of the generator. To install a non-emergency generator greater than 300 brake horsepower, you will need to obtain an air permit, or amend an existing permit prior to any contractural obligation entered into by the Facility.  Emergency-only generators typically will not need a permit or permit amendment to install; however, peak shaving programs are not considered emergency and there are still several provisions that may apply whether or not a permit is required. These provisions, and the factors used to determine applicability are discussed in further detail below.

What is a Stationary Reciprocating Internal Combustion Engine?
Stationary Reciprocating Internal Combustion Engines (RICE) are engines that utilize the expansion of gases and the resultant increased pressure from the combustion of fuel inside a confined cylinder(s) to move one or more pistons back and forth in order to rotate a shaft and produce mechanical power. The mechanical power can be used directly for equipment like  pumps or compressors, or it could be used to power an electric generator and to produce electricity.

Stationary reciprocating internal combustion engines use either compression ignition (CI) or spark ignition (SI) in order to induce combustion within the cylinders.  CI RICE typically run on diesel fuel, while SI RICE typically operate on lighter fuels (e.g. gasoline, propane, natural gas, biogas, etc).  RICE generate air pollution from the combustion of fuels, typically generating higher levels of pollution than other combustion sources, such as boilers, due to the higher pressures inside RICE and the repeated “batch” combustion that occurs with each combustion cycle that moves the piston(s).

To meet the definition of a Stationary RICE under Vermont regulations, the engine must remain at a stationary source for a consecutive 12 months, or for a full operating season at seasonal sources.  Federal regulations differ, in that if the engine is mounted to a chassis designed to be moved, either under its own power or with external power, it is not considered a stationary RICE, but rather a non-road engine.

What About Highway Vehicle Engines and Non-Road Engines at My Facility?
Highway vehicles (e.g. trucks, buses, passenger cars and motorcycles) registered for use on public roadways are subject to separate motor vehicle emissions standards and are not subject to or included in any air permit for a stationary source issued by the Vermont AQCD.  Non-road engines (e.g. locomotives, marine vessels, off-road recreational vehicles, lawn & garden equipment, and non-road construction equipment including haul trucks, bulldozers and portable generators) are also subject to separate emission standards but their regulation is more complicated.  For any stationary source in Vermont required to obtain an air permit for other air pollution emissions (see VAPCRs 5-401 for a listing of air contaminant sources requiring air permits), the air pollution emissions and fuel usage for any non-road engines will be included in the air permit.  The primary reason for their inclusion in the air permit is due to the emissions from these engines likely occurring entirely at the stationary source, unlike highway vehicles that release emissions over many miles of highways.

However, the Federal definition for non-road engines includes provisions that state these engines will become stationary sources depending on how they are used.  If a non-road engine remains unmoved at the same, single, fixed location for a consecutive 12 months, or for a full operating season at seasonal sources it will be considered a stationary engine.  Compressors and generators are often used in this fashion.

Thus prior to installation of the Stationary RICE, you must notify the AQCD Permits & Engineering Section to ensure you are fully aware of your compliance obligations.  The notification must include the following information: the make, model, engine hp rating, generator kW rating (if applicable), the year of engine manufacture, and the emission certification for the engine.  This information is available on the engine nameplate(s) attached to the engine, as opposed to the generator nameplate which is attached to the generator component.  A photograph of the engine nameplate(s) should be included with the notification to ensure all the information is accurately captured and submitted.  If the intended use is as an emergency generator, the notification must also state that the emergency generator is to be used for emergency use only and that you are familiar with the state and federal definitions restricting what operations are allowed for emergency generators.  Generators to be used for non-emergency  purposes, including most peak-shaving programs, will generally require a permit or permit amendment before installation.

Equipment Specifications & Designs
Please submit the following information to the Permitting and Engineering Section when applying for a permit.

State Regulations for Generators
The state permitting exemption for emergency generators applies only to emergency use only generators and only if the aggregate capacity of those engine generators at the entire facility are less than 2,000 bhp.  The Vermont definition of emergency use only allows unlimited operation during emergency events outside the control of the facility as well as up to 100 hours per year of routine testing and maintenance.  Under the Vermont definition only, emergency events also include operation as part of the ISO New England or local power company emergency demand response programs.  These programs are used to ensure reliability of the electric grid during extreme high demand electric use times and are only implemented after brown-outs have also been implemented.  These programs are very limited and do not include most peaking or load shedding programs used to reduce electric usage when power costs are high but grid reliability is not threatened.  If in doubt, you should contact your power company and the AQCD Permits & Engineering Section to confirm if the program is eligible.  Even if your emergency generator qualifies for the permit exemption, it may not be exempt from meeting minimum emission standards.  If the engine is 450 bhp or greater and installed after July 1, 2007 it must at a minimum meet the federal EPA Tier 2 non-road engine emission standards of 40 CFR Part 89 or the equivalent.  This includes engines to be used for emergency backup.  The effect of this regulation is that many older non-compliant engines cannot be installed in Vermont.  Most existing emergency generators installed prior to that date were allowed to remain for emergency use only.  If your engine is 450 bhp or greater you will need to provide documentation to the AQCD Permits & Engineering Section that the proposed engine is in compliance before you install the engine.

Federal Regulations for Generators
The federal US EPA has two air pollution related regulations that may apply to your generator.  One applies to new engines and one applies to existing engines.  Both allow emergency generators to operate for unlimited hours for emergency situations and up to 100 hours per year for maintenance checks and readiness testing but both have more restrictive requirements for operation as part of emergency demand response programs.

The exact applicability of these regulations is very complicated for engines installed in the 2005-2007 transition period.  One regulation applies to new engines of model year 2007 and newer, as well as those ordered after July 11, 2005 that were manufactured (not installed) after April 1, 2006  and one applies to existing engines installed prior to June 12, 2006.  Applicability to these regulations in the transition period is not seamless and it is possible to have an engine subject to one, both or neither of the regulations.

If you are considering using biodiesel fuel, please note that all of the following conditions must be met:

1For stationary engines manufactured and labeled emergency use only, Subpart IIII does not require them to meet the latest (Tier 4) emission standards as established for non-road engines in 40 CFR Part 89 and 1039. Such stationary emergency use only labeled engines are allowed to meet Tier 3 for engines less than 750 bhp and Tier 2 for engines greater than 750 bhp. In addition, non-road engines greater than 750 bhp (560 kW) that are not a component of a genset, the Tier 4 emission standards may likely be met without the need for a selective catalytic reduction (SCR) catalyst and the injection of diesel exhaust fluid (DEF).

Part 63 Subpart ZZZZ
This regulation applies to existing engines installed prior to ~June 12, 2006 and its requirements fall primarily on the facility operating the engine.  The requirement vary depending on the size and use of the engine.  Emergency generators at residential/commercial/institutional facilities, but not industrial facilities, are exempt.  The federal definition of emergency operation is not consistent with the state definition and is the subject of ongoing litigation.  Currently emergency use only engines may not be operated as part of the ISO New England emergency demand response program.  Some non-emergency operation is allowed but such operation cannot be used for peak shaving or non-emergency demand response or to generate income for a facility, except as currently allowed in (f)(4)(ii) that does still allow up to 50 hours of “local” demand response.  You should consult the regulation and EPA directly to ensure you remain in compliance with these provisions if you intend to operate the engine for any non-emergency or demand response programs.