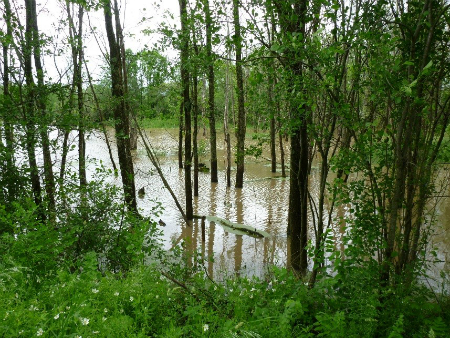 During rain storms and snow melt events, the amount of water running over the surface of the land increases, and in severe storms, flooding may result. Many wetlands, particularly floodplain wetlands, have the capacity to temporarily store flood waters during high runoff events. Although wetlands have often been referred to as natural sponges that soak up water, they actually function more like natural tubs, storing either flood waters that overflow riverbanks or surface water that collects in isolated depressions. As flood waters recede, the water is released slowly from the wetland soils. By holding back some of the flood waters and slowing the rate that water re-enters the stream channel, wetlands can reduce the severity of downstream flooding and erosion. 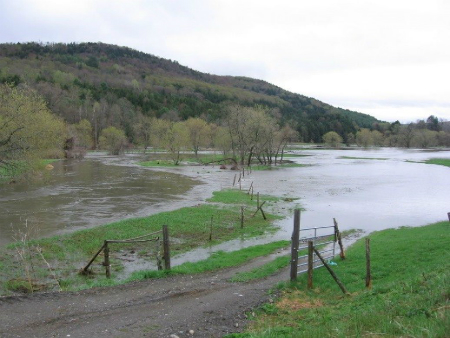 In watersheds where wetlands have been lost, flood peaks may increase by as much as 80 percent. Wetlands within and upstream of urban areas are particularly valuable for flood protection. The impervious surface in urban areas greatly increases the rate and volume of runoff, thereby increasing the risk of flood damage. During Tropical Storm Irene, Otter Creek flooded Rutland with nearly 19,000 cubic feet per second of water, severely damaging homes, roads, and other infrastructure in the city. In comparison, Middlebury experienced minimal flooding with a peak flow of only 7,000 cubic feet per second – significantly less than Rutland, which is located upstream. Why was Middlebury spared? It seems that the Otter Creek Swamp Complex, located between Rutland and Middlebury, stored the floodwaters and gradually released them. The difference between the flooding experienced by these two communities demonstrates the value of wetlands for water storage and flood control. On the Charles River in Massachusetts, the floodplain wetlands were deemed so effective for flood control by the U.S. Army Corps of Engineers that they purchased them rather than build expensive flood control structures to protect Boston.

According to the Vermont Wetland Rules, wetlands that provide for the temporary storage of floodwater or stormwater runoff to the extent that they make an important contribution to: reducing risks to public safety, reducing damage to public or private property, reducing downstream erosion or enhancing the stability of habitat for aquatic life, are significant wetlands. In determining whether a wetland is significant for the Water Storage for Flood Water and Storm Runoff, the Secretary or Panel shall, at a minimum, consider the extent to which it:

a. Reduces either the magnitude or frequency of risks to public safety or of damage to public or private property due to flood water or stormwater runoff after considering:

c. Maintains the geomorphic stability of important habitat for aquatic life by attenuating peak flows of flood waters or stormwater runoff, or reducing the scouring and erosion of stream banks, or both.
Hydraulic and hydrologic analysis of the extent to which a wetland serves this function shall utilize average annual, 10-year, 50-year and 100-year storm frequencies in generating hydrographs for the wetland's inlet, outlet and at critical locations upstream and downstream.