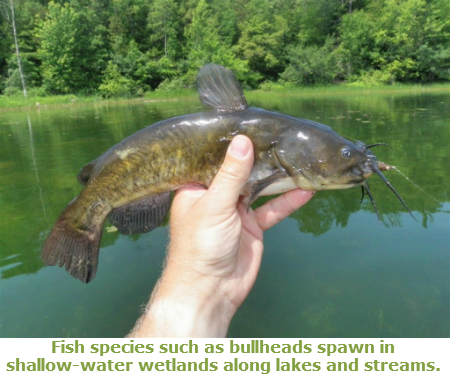 Certain freshwater fish species require wetlands as spawning grounds and as nursery areas for their young. Spring spawning by northern pike in Lake Champlain is a particularly good example. Others, like black bullhead, yellow perch, pumpkin seed and bluegills, leave open water to spawn in shallow-water wetlands. The failure of many aspects of commercial and recreational freshwater fishing in the Great Lakes has been linked to wetland destruction. 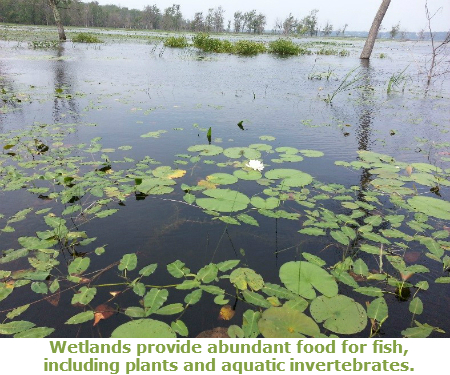 Wetlands can be thought of as the farmlands of the aquatic environment since they produce great volumes of food (plant material). The major food value of wetland plants comes when the plants' dead leaves and stems break down in the water to form small particles of organic material called "detritus". This enriched material is the principal food for many small aquatic invertebrates, various shellfish, and forage fish that are food for larger predatory fish. These larger fish are, in turn, consumed by people.

According to the Vermont Wetland Rules, wetlands that are used for spawning by northern pike or that are important for providing fish habitat are significant wetlands. In determining whether a wetland is significant for fish habitat the Secretary or Panel shall, at a minimum, consider the extent to which it:

a. Provides spawning, nursery, feeding or cover habitat for fish.
b. Lowers or moderates the temperature of surface waters due to the discharge of cold springs, the provision of shade or for other reasons.