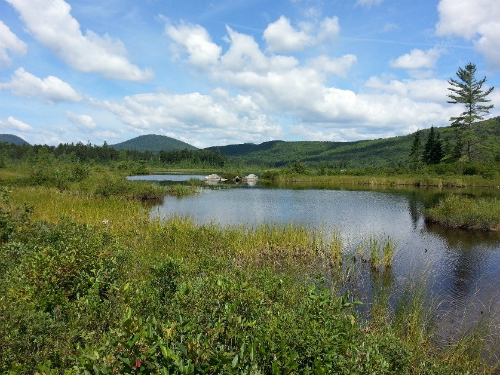 Many wetlands are visually rich environments because of their ecological interest and diversity. Historically, writers, artists, and photographers have been drawn to wetlands trying to capture the beauty on canvas and paper. Open wetlands, such as marshes, are often considered to be more attractive than shrub or forested wetlands. Wetlands that provide high wildlife habitat are perceived as more aesthetically pleasing because people go to wetlands to see wildlife. In areas where most of the uplands have been developed, the remaining wetlands are increasingly valuable for open space. Wetlands along streams provide natural green belts and corridors for wildlife.

According to the Vermont Wetland Rules, wetlands that provide substantial recreational values or economic benefits are significant wetlands. In determining a wetland is significant for the Open Space and Aesthetics function, the Secretary or Panel shall, at a minimum, consider the extent to which it:

a.  Can be readily observed by the public.
b.  Possesses special or unique aesthetic qualities.
c.  Has prominence as a distinct feature in the surrounding landscape.
d.  Has been identified as important open space in a municipal, regional or state plan.