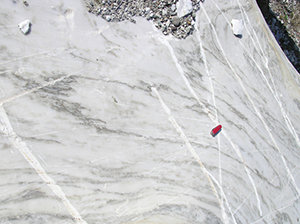 Much of the Vermont marble industry is located within the Champlain Valley and Vermont Valley physiographic province. The Valleys are composed of the shallow marine Cambro-Ordovician shelf sequence, deformed by Taconian folding and faulting. Carbonate sediments have been altered into low-grade marbles, and tight folding has thickened the limbs of associated folds, significantly increasing the size of the ore deposits.

The Fisk quarry in Isle La Motte is probably the oldest quarry in Vermont. It was started by Ichabod Fisk and is thought to be the first marble quarry in Vermont. The quarry produces limestone from the Fisk/Goodsell beds of the Middle Ordovician Crown Point member of the Chazy formation. Beds are massive, with dark luster when polished. First operated in 1664 for the production of lime, it became known for production of black marble. In the late 1700s the quarry began producing quarry blocks which were shipped by boat to the Barney Marble Company in Swanton. The finished product, formerly marketed as “Fisk black” or “Fisk gray,” is now commercially sold as “French gray” or “Champlain black”. Black marble has been removed intermittently from several other quarries, including the Goodsell, Fleury and Hill quarries, since the middle of the 19th century.

In 1901, Vermont Marble Company purchased the Fisk and Goodsell quarries. The Goodsell quarry averages 34,000 cubic feet annually (early 1990s), 50 percent of which is of marketable quality. Black marble from these quarries has been used as decorative stone in Radio City Music Hall, the National Art Gallery in Washington, D.C., and the Vermont State Capital in Montpelier.

Red or oriental marble was quarried in Swanton from the Dunham Formation.

“Verde antique marble” is the commercial name for the dark green serpentine crossed by shear fractures filled with white calcite. Though the common name is marble, this rock is actually a metamorphosed ultramafic hydrous magnesium silicate containing minerals similar to chlorite and talc. The hardness and beauty of this rock make it perfect for tiles, countertops, sinks, or building facades. These serpentinite bodies, first found in the 1920’s, are located in the northern talc mining districts, the geology of which are discussed in a later section. Verde antique is mined in Rochester. Locations at Waterbury, Roxbury, Barnes Hill and Mad River are not currently quarried. To view a presentation on quarrying at the Rochester Quarry, click here.

White marble deposits of the Columbian member of the Ordovician Shelburne Formation are located on the western limb of the Middlebury Synclinorium. Next to Italy’s Carrara districts, they yielded the world’s greatest volume of dimension marble. The marble beds are gently to steeply dipping as one moves northward along strike. In the Dorset area, in the southern part of the synclinorium, the beds are relatively flat-lying. Further north, along strike, an “s” fold structure has thickened the beds, providing the location for the Danby Imperial quarry, which has been in operation since 1903.

The Danby quarry** is located on the northeast flank of Dorset Mountain in Danby. It is the world’s largest underground quarry, covering 25 acres. It lies in a broad depression 75 feet thick at its center and up to 500 feet wide. In 1971, direct road access was developed. Haul roads and ramps into the quarry lead to the present work area some 2,800 feet into the mountain. The quarrying operation uses a “room and pillar” technique, leaving piers about 30 feet square between 40 foot wide “rooms.” Blocks removed from the Danby quarry have weighed up to 93 tons and have been used in the Supreme Court Building, Jefferson Memorial, United Nations Building, the Sama Bank Building in Saudi Arabia, and the Chiang Kai-Shek Memorial.

The West Rutland quarries are located further north along strike. The beds here occur along the fold axis, and are steeply dipping to vertical. These marbles were noted for their color patterns caused by chlorite veining. Competition from lower priced Italian marbles forced abandonment of operations in the 1970’s. Quarries have also operated in the Pittsford, Brandon and Middlebury areas with varying degrees of success.

Crushed stone ranks second in terms of value in Vermont’s mineral commodities. Limestone is the primary rock quarried, followed by marble and granite. Crushed stone is quarried from 17 locations across the state. Several former dimension stone quarries are now used for ground product, including the Middlebury and Smokerise quarries. Finely crushed marble, or calcium carbonate, is used in many everyday products. Crushed marble that is of very high quality is used in products such as anti-acids, tooth pastes, gum, and most other foods that have calcium added. Other uses include acid-free paper – paper that contains acid cannot contain calcium carbonate because they react with one another. The whiteness of the marble produces paper that is very white and doesn’t require the use of chlorine to bleach the paper.

OMYA is noted for its “progressive reclamation” techniques, wherein as the quarries are extended into the countryside, new and sometimes improved farmland replaces the areas that have been quarried. At the Middlebury quarry, approximately 11 acres of agricultural land have been developed, some in areas previously not farmed due to exposed bedrock and poor quality soil. In essence, as quarrying proceeds, waste rock, overburden glacial till and topsoil are stockpiled for use in reclamation. A layer of waste rock is placed over the site followed by a layer of glacial till. Finally topsoil is placed over the site; areas with less than 3:1 slopes are then cultivated, while steeper areas are seeded with conservation mix, limed, fertilized and mulched.