Most granites of Vermont are assigned to the Devonian New Hampshire Plutonic Suite (NHPS). The suite extends the entire length of the state from the Black Mountain pluton in Dummerston to Averill in northeastern Vermont. The most prominent exposures of granitic rock are located north and east of Barre. Although nearly all of these plutons have been quarried at one time, the most active quarries today are the Barre pluton at Graniteville and Websterville. While many of the plutons of the NHPS in New Hampshire represent distinctly different episodes of intrusion, the granites of Vermont are roughly the same age– emplaced following the deformation of the Lower Devonian sediments during the Acadian Orogeny. Potassium/Argon (K-Ar) and Rubidium/Strontium (Rb/Sr) ages for the pluton range from 380 to 330 million years old. Other igneous rocks in Vermont include the Early Cretaceous-Jurassic White Mountain Igneous Suite (ie Ascutney, Cuttingsville, and Barber Hill) and the Silurian  age Lake Memphremagog Intrusive Suite. 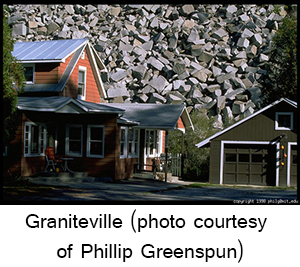 The Barre pluton intrudes Silurian-Devonian metasediments (A sediment or sedimentary rock that shows evidence of having been subjected to metamorphism) of the Gile Mountain and Waits River formations, and is estimated to be about four miles long, one mile wide, and ten miles deep. Contacts with the metasediments are mildly to strongly discordant (The contact is not parallel to foliation or bedding in the country rock); xenoliths (a fragment of country rock within a volcanic rock) are common near the contacts. The Barre pluton, a gray medium to fine-grained granodiorite, is very consistent across the unit in terms of composition. Its mineral composition consists of 35 percent oligioclase feldspar, 9 percent biotite mica, 27 percent quartz , 21 percent microcline feldspar and 6 percent muscovite mica and various accessory minerals.

The granite industry began to boom following the Civil War, with small stone sheds opening in the Barre area around 1880. The growth in the industry is illustrated by the rise in population around Barre between 1830 and 1910 from 2,012 to 12,000. The establishment of a rail route from Burlington in 1849 that extended to Barre in 1875 was an integral factor in the industry’s growth.

In 1905, the Boutwell, Milne and Varnum Corporation was established and became known as Rock of Ages in 1914. Initially, the company was primarily involved in granite quarrying but later diversified and expanded to include a modern quarry plant near the quarries. The introduction of the steam drill in the 1920s permitted quicker removal of the stone. The use of explosives and pneumatic drills and the adoption of electric batteries increased production. In 1930, Rock of Ages acquired ten granite manufacturing plants in the Barre area and entered the monument manufacturing and wholesale business). About a third of the nation’s monuments are now produced in the Barre granite district. The E.L. Smith Quarry owned by Rock of Ages is believed to be the world’s largest monumental granite quarry. It encompasses 50 acres and is 570 feet deep. The Rock of Ages quarry, in operation for the past 120 years, is 350 feet deep and covers 30 acres. This quarry is now in reserve. The single largest block quarried anywhere in the world is believe to have been produced by Rock of Ages in 1913. Weighing about 32,500 tons, the block measured 200 feet long, 80 feet wide, and 24 feet thick. Raw granite blocks not suitable for memorials are being promoted for use in levee construction, stream rehabilitation and and bank stabilization.

Dimension stone (stone quarried for blocks or slabs), either of granite or marble, is the state’s leading mineral commodity in terms of value, with granite number one in terms of tonnage. The Barre Granite Association, the trade organization that represents 60 quarrying and manufacturing companies in the Barre area, celebrated its 100th anniversary in 1989. The companies employ more than 1,700 workers, with $25 million enhancing the local economy through salaries and benefits. Rock of Ages, acquired by Polycor, Inc. in 2016, and its affiliates quarry about 1.5 million cubic feet per year from 10 active quarries. More than 700,000 cubic feet in granite blocks are produced from the Barre area annually, representing 25 to 40 percent of the quarried stone, with a total recovery of about 15 percent.