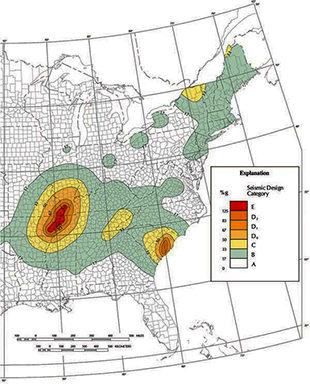 To the left is a seismic design category (SDC) map from FEMA’s web site. The map indicates the likelihood of experiencing shaking of different intensities in different areas of the country. According to this map, a limited area in northwest Vermont (shown in yellow) is in SDC C, an area which could experience strong shaking and experience some building damage, while the majority of the state is in SDC B. In SDC B, only moderate shaking is expected and although frightening, damage would be slight.

Damage also depends on the type of structure in any area. Old unreinforced masonry (URM) buildings are of greatest concern since they do not perform well in an earthquake. It is estimated that sections of downtown areas in Chittenden and other counties may contain more than 3000 of these older red brick buildings. Since we do not know with certainty the number of URM buildings which exist in Vermont, the Vermont Geological Survey requested a study from the Northeast States Emergency Consortium (NESEC) to estimate the number and distribution of these buildings in Chittenden County using HAZUS-MH, a FEMA computer program for loss estimation. The next steps would be for towns to conduct an inventory to determine actual URMs in their communities and to better plan for mitigation and emergency response. 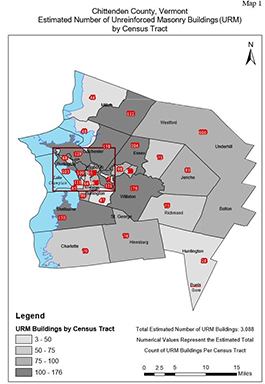