Gasoline vapors are released to the atmosphere every time a fuel tank is filled with gasoline. This happens when filling a large underground storage tank as well as the fuel tank of a motor vehicle. Vermont adopted regulations, referred to as Stage I and Stage II vapor recovery, to require the control of these vapor emissions. 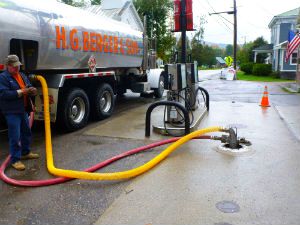 Stage II vapor recovery refers to the capture of gasoline vapors generated when a motor vehicle fuel tank is filled at a GDF.  Most motor vehicles are now equipped with an onboard refueling vapor recovery system that controls the vapors emitted during refueling. This led to the Legislature passing a law in 2009 that repealed Vermont’s Stage II regulation as of January 1, 2013.