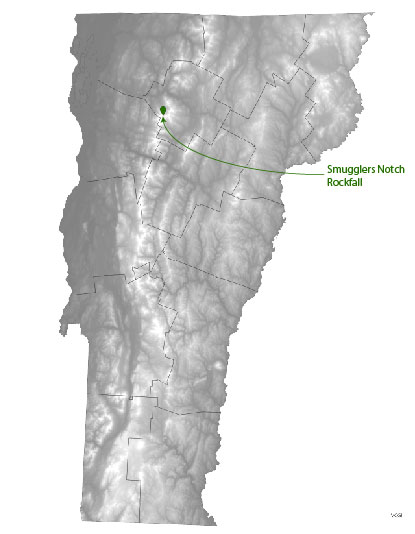 On the morning of May 31, 2020 a large rock fall event occurred in Smugglers Notch in Cambridge, Vermont. A portion of the cliff face high up on the west side just north of Cass's Gully broke off and fell onto the talus slope below. As they fell, large blocks of schist bounced, rolled, or slid down the talus slope. Many trees were damaged or snapped or swept along by the falling pieces of rock. At least two large blocks reached Vermont Route 108 in the floor of the Notch, damaging at least one vehicle. There have been no reports of injuries. Although the volume of the fallen rock has not yet been determined, this is certainly one of the largest rock fall events in the Notch in the last 30 years.

Vermont Geological Survey staff visited the site on June 1 along with Ethan Thomas and Chris Eddy of VTrans, and George Springston of Norwich University.

Ethan and Chris determined that the rock fall originated from a part of the cliff face to the north of Cass’s Gully on the west side. The falling blocks spread out along three tracks as they bounced down the slope.

The Vermont Geological Survey previously prepared a detailed report on slope failures in Smugglers Notch (Springston, 2009). This report lays out the types and sizes of the landslides that have taken place there, their historic occurrences, the timing of landslides and their possible causes and triggers. A slope instability hazard map was developed as part of the study. 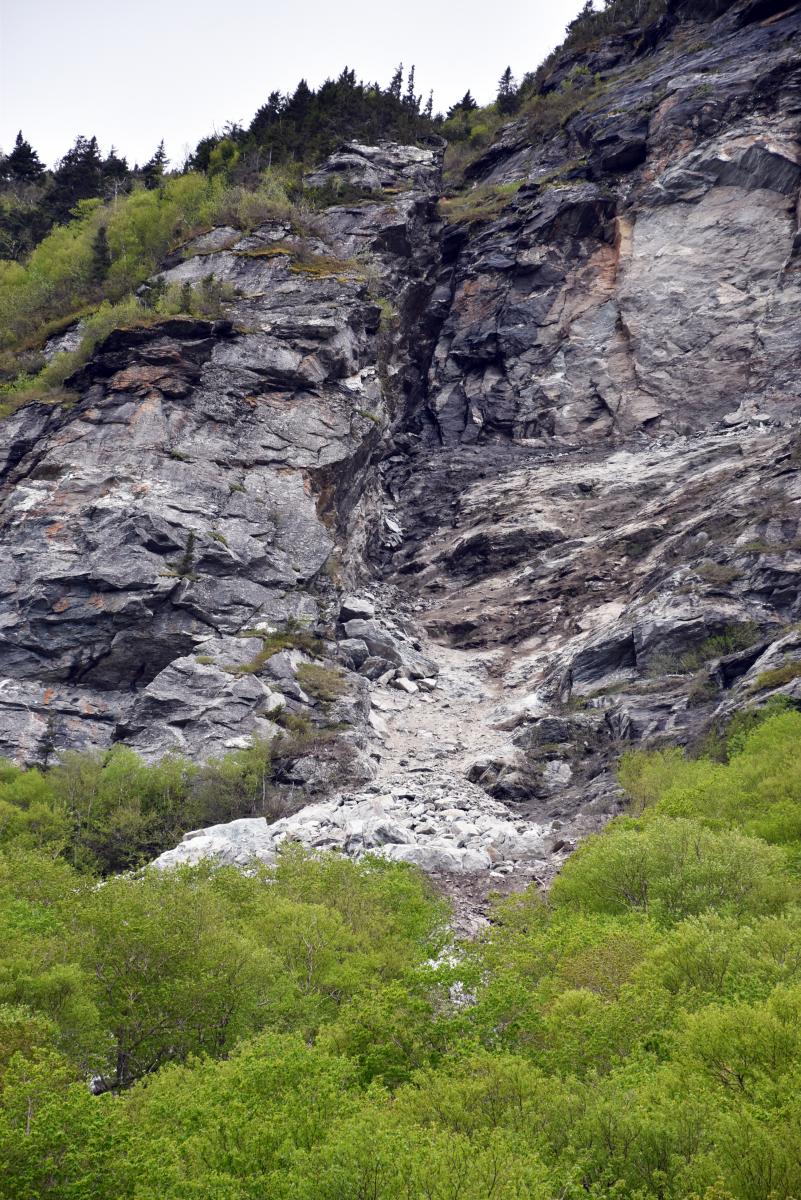 Two types of slope failures or landslides occur in the Smugglers Notch area. The first broad class of landslides is rock falls and rock slides, which involve one or many large pieces of rock detaching from a cliff and falling, bouncing, or sliding down a slope. Most of the boulders on the floor of the Notch appear to be the result of such rock falls. The recent rock fall was in this first class. The second class of landslides is debris flows, which are slurries of water, mud, pebbles, cobbles, and boulders that flow within shifting channels on the talus slopes below the cliffs. In the Notch, they are caused by heavy rainstorms. There is no evidence of a debris flow associated with the recent event. Both types of slope failure are discussed in more detail in the report linked above.

Both rock falls and debris flows appear to be triggered by intense rainfall events and/or rapid snowmelt.

Landslides have occurred in Smugglers Notch for thousands of years and we can expect large rock falls and slides and damaging debris flows to continue long into the future. The slope instability hazard map prepared as part of the report shows a relative ranking of areas of high, moderate, and low hazard on the basis of evidence for continued and future rock fall and debris flow activity. This map is based on a combination of historical evidence, earlier geologic studies, interviews with knowledgeable persons, field work, and aerial photo interpretation. It is intended to be used by managers as a planning tool.

The large boulders that litter the floor of the Notch are evidence of the past history of rock falls. Boulders that fell in the recent event will be there for centuries to come, adding a new chapter to that history. 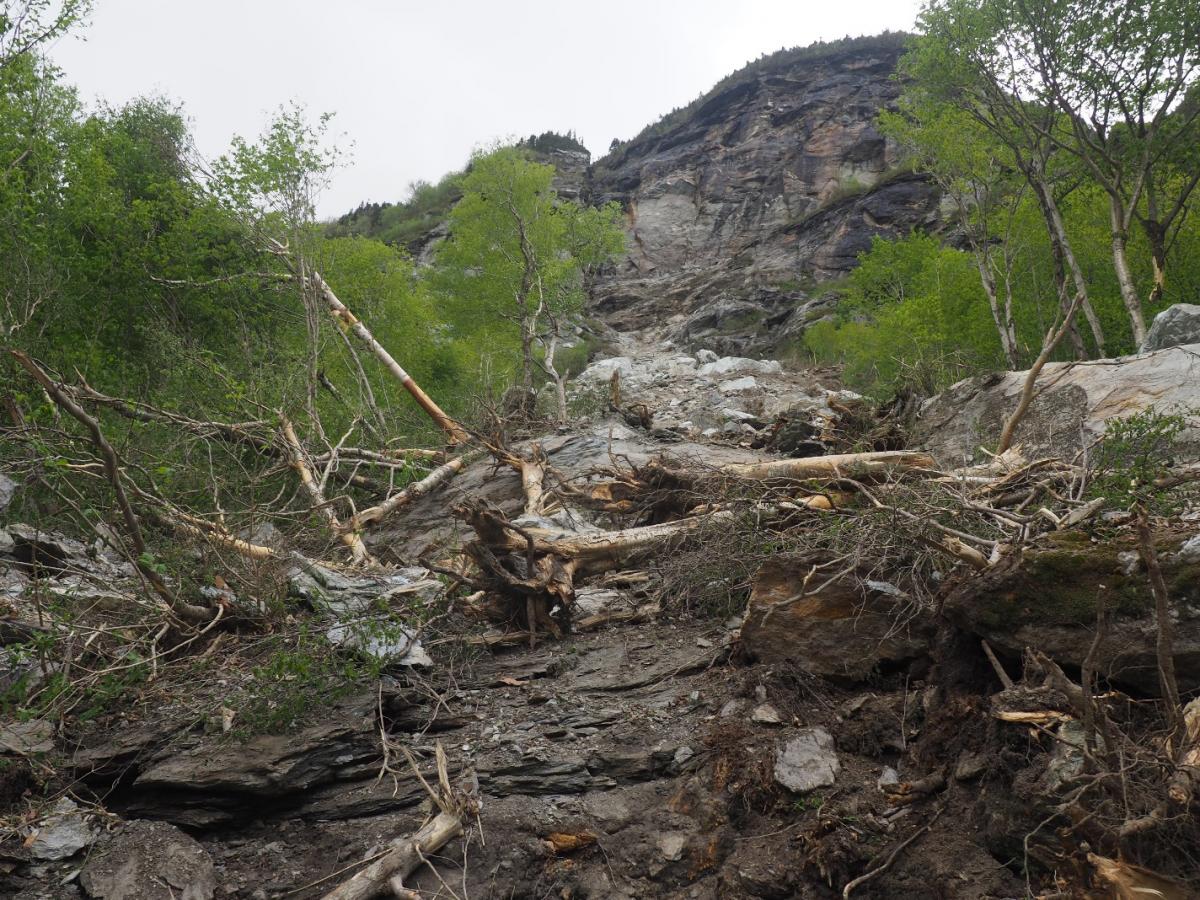 (Looking up the rock fall path from mid-way up. Photo: G. Springston) 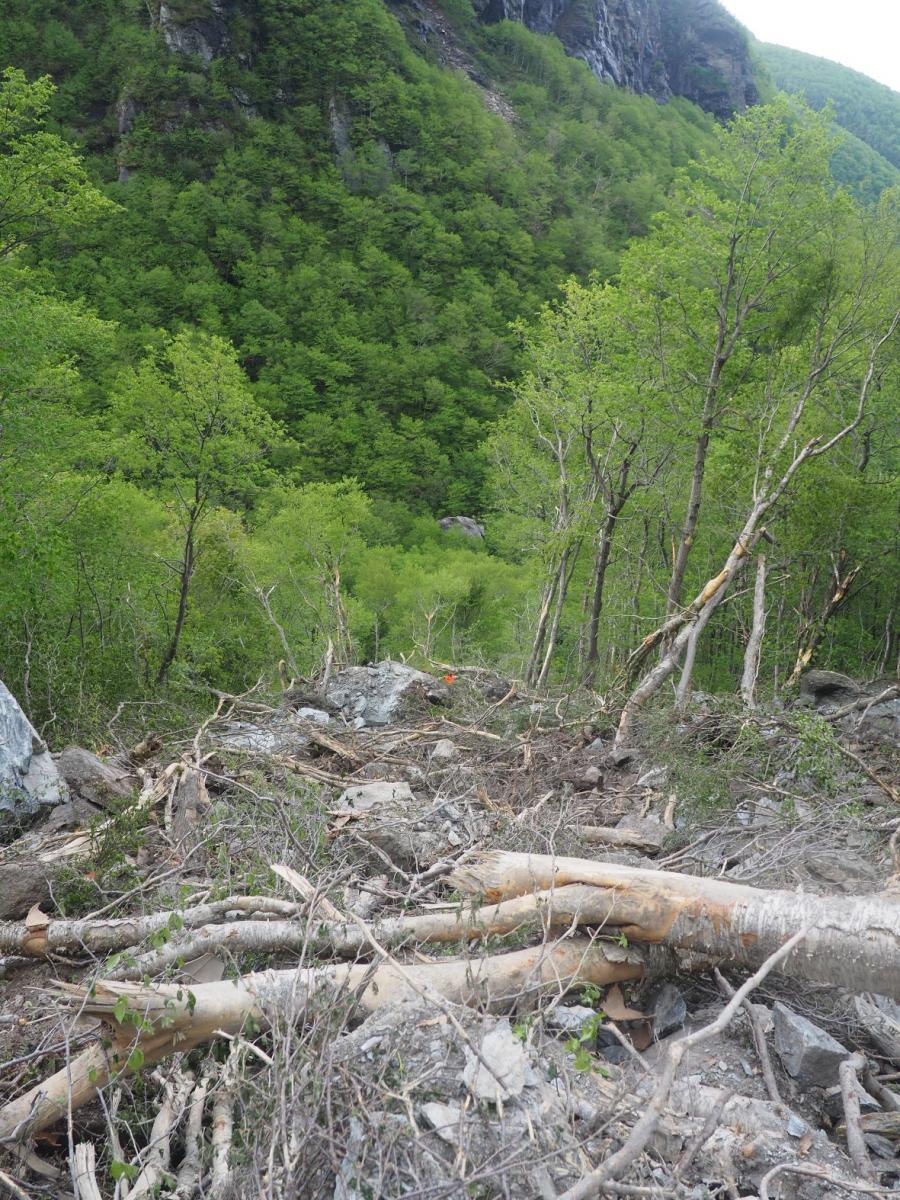 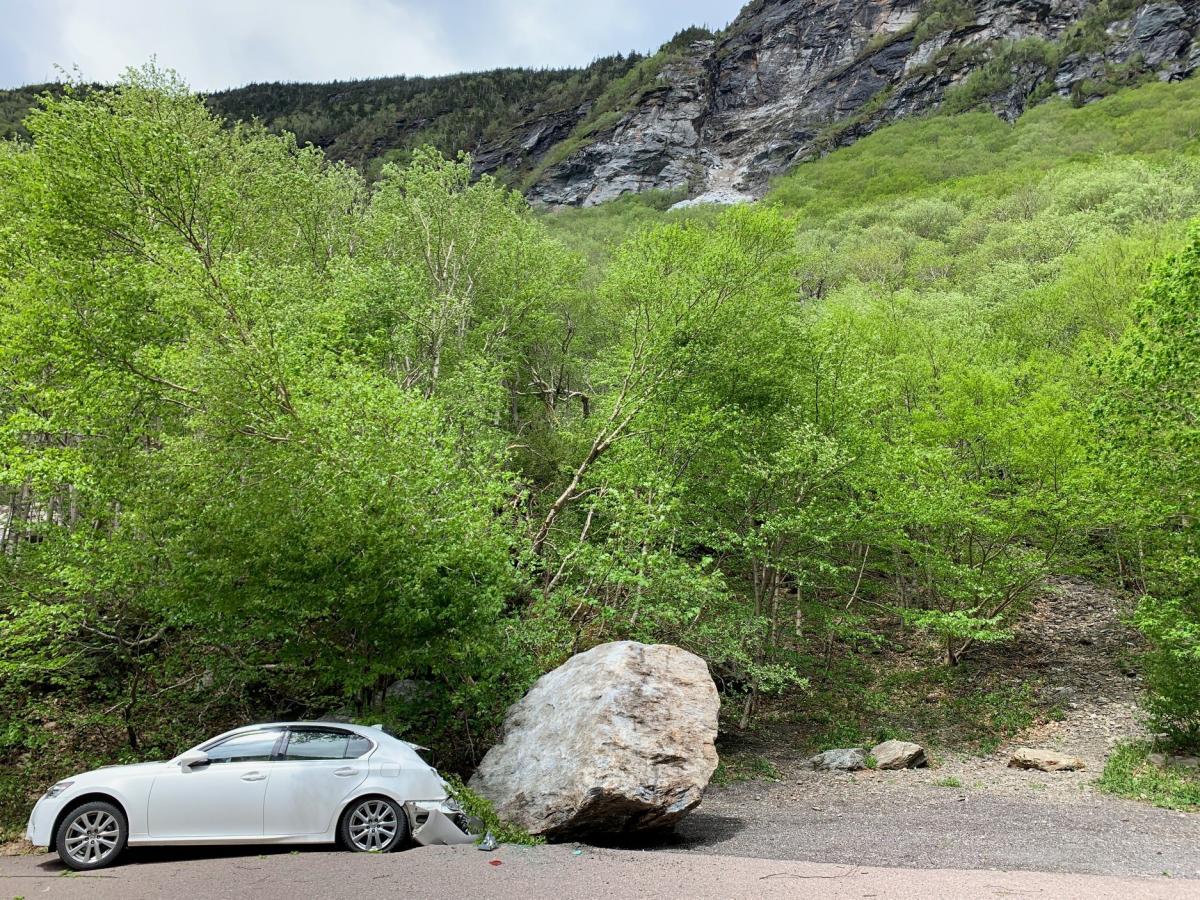 (Vehicle damaged by a fallen boulder at base of Hidden Gully debris flow path along VT 108. There were no reported injuries. Photo: Vermont State Police) 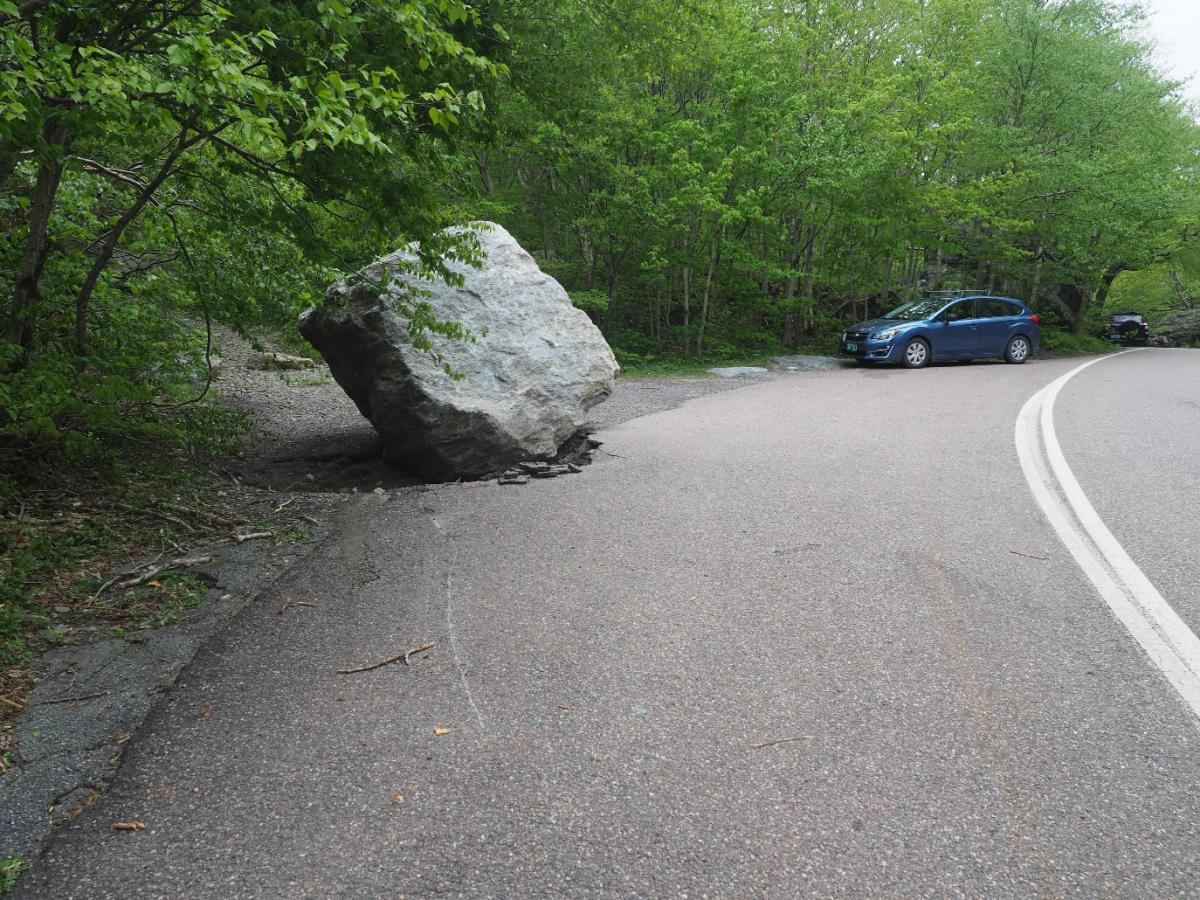 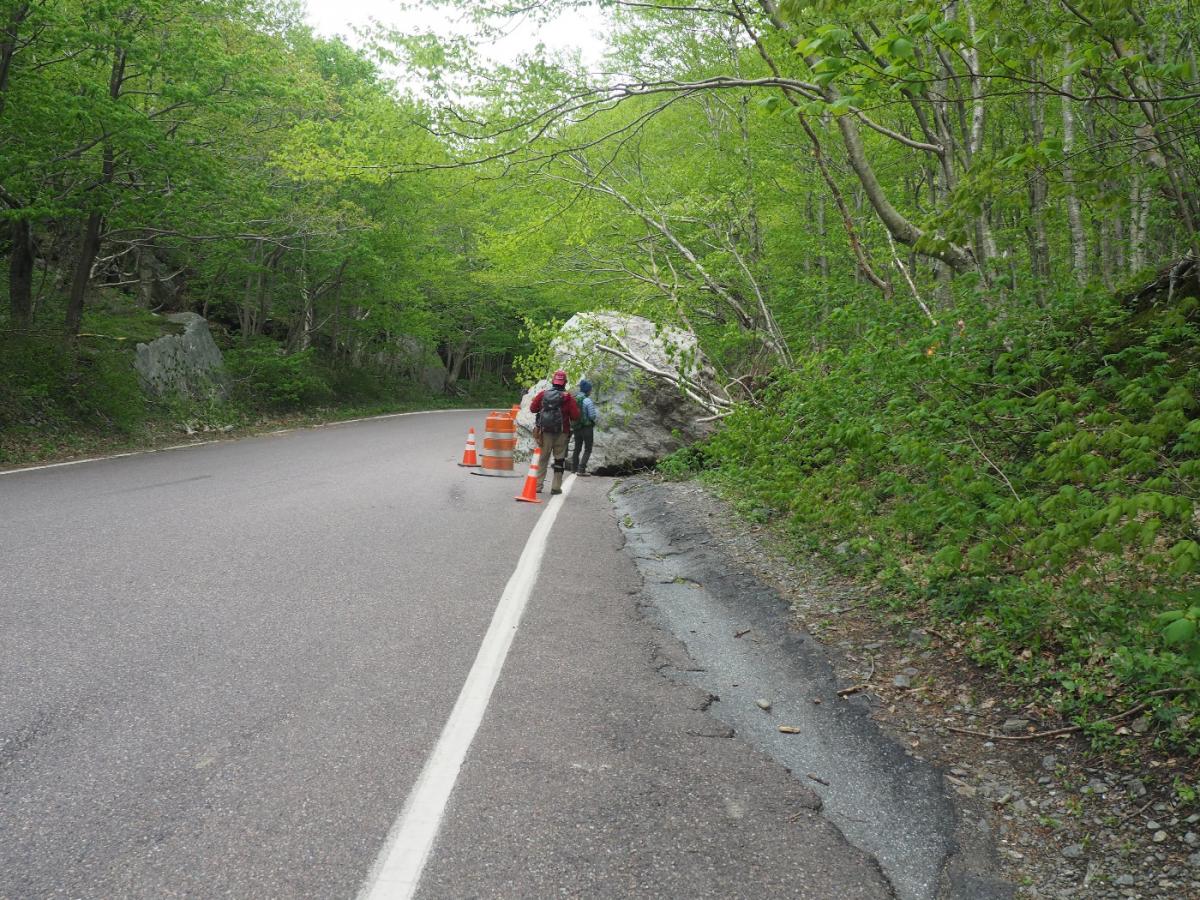 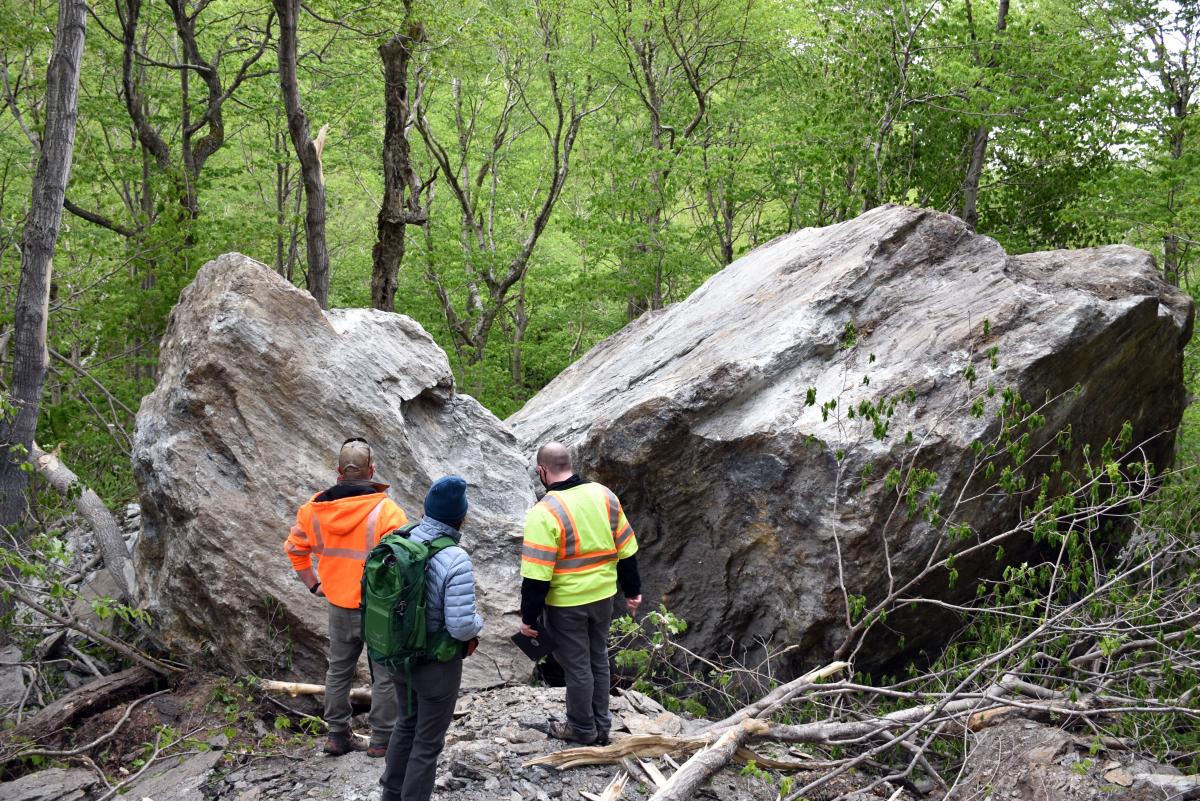 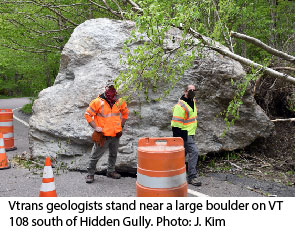 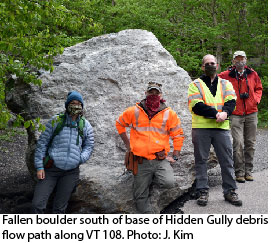 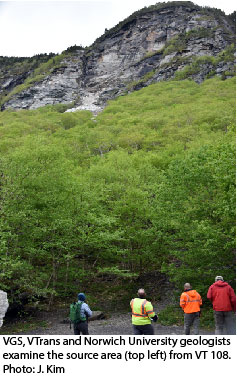 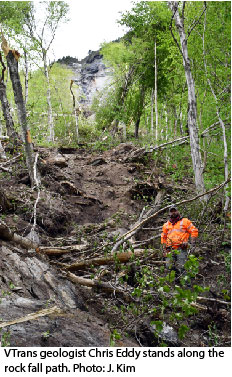